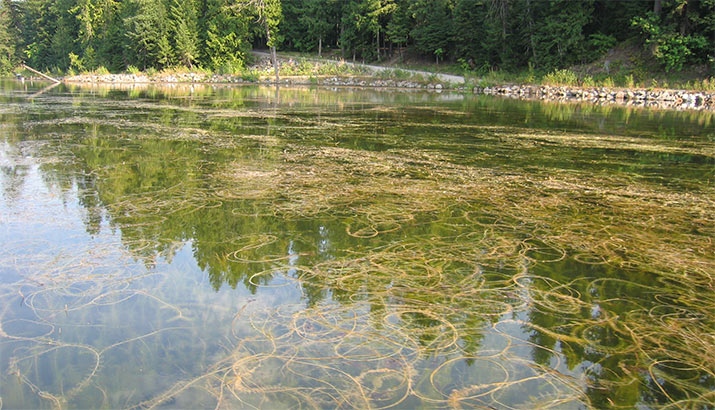 What happens when an animal or plant from a given area or habitat is brought to another spot? Often, it won’t find the resources needed for its survival, and so will not remain in the long run. But sometimes, this alien species actually takes over, eventually posing a threat to the environment. This happens when they find a habitat they can survive in and there are no predators present to keep this new inhabitant’s population in check. When things get out of control, these species are called invasive aliens. Many of these can now be found in Canada, especially in our aquatic habitats. But how did they get here in the first place?

Aquatic invasive aliens are brought to Canada primarily by ships. They can hitch a ride accidentally when a ship’s ballast tanks are filled with water (and sometimes, a bit of mud and sand) to maintain stability during a voyage. These plants and animals, as well as eggs, seeds, and micro-organisms may survive the ship’s voyage, and, when they do, are released into new waterways when the ship empties the ballast tanks. Other species can be brought over on the ship’s surface or equipment. This is how the zebra mussel hitchhiked its way to the Great Lakes.

Aquatic species can also spread to other regions through recreational and commercial boating. These include plants entangled on boat trailers, invertebrates attached to hulls and equipment, and plankton trapped in live wells and bilge water (or water within the boat itself). Tunicates, for example, are marine invertebrates which have spread mainly because of boating.

The use of live bait for recreational fishing far away from where these bait species originated is another way new species can be introduced. Sometimes, fish, invertebrates, aquatic plants or diseases may also be accidentally collected as by-catch or stuck on fishing gear and released inadvertently into new areas. The rusty crayfish is a well-known example of a bait species that has invaded new habitats.

Both freshwater and marine fish and invertebrates can be used to create live fish food that is then sold worldwide to aquarium enthusiasts. Unsold fish may be dumped into local waters by the industry, along with their holding water, which can also contain hitchhiker species, pathogens, and fertilized eggs. The bighead carp is one of these culprits, which, while originally from China, is now found in the northern United States bordering the Great Lakes.

The aquarium and water garden trade is another way to enter Canadian waters from abroad. Aquarium owners, for example, may dispose of unwanted species, including parasites or diseases, into the environment by directly releasing them into the wild, dumping them into storm sewers, and flushing them down the toilet or sink. Water garden specimens may also be dumped into local waterways at the end of the summer season, or escape accidentally during floods. Because of this, a number of plants from temperate and tropical zones, like the Eurasian watermilfoil, are now well established in parts of Canada.

Some historically isolated water systems have been linked by canals to make navigation easier. These ‘invasion corridors’ can contribute to the exchange of species between watersheds within Canada, as well as the spread of species from the U.S. to Canada, and vice versa. One example of this is the sea lamprey, which entered North American waterways via locks and shipping canals. The species has flourished in the Great Lakes, contributing to the decimation of many native fish populations.

Last, but not least, aquaculture can also result in the introduction of non-native species to aquatic ecosystems. Farmed organisms, like the Atlantic salmon, may escape into the wild and successfully reproduce or interbreed with native species. Parasites, invertebrates and algae may also be inadvertently introduced and spread because of aquaculture.

There are many ways you can help reduce the spread of aquatic invasive alien species. To find out more, you can visit Hinterland Who’s Who and the Rivers to Oceans Week website!