Banding Birds in the Yukon 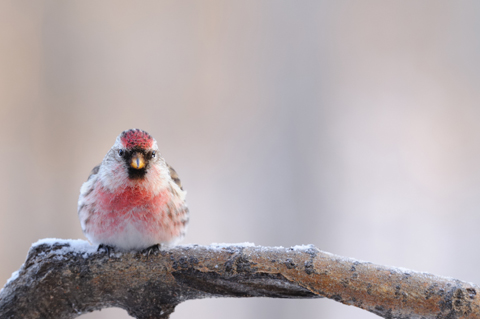 Bird species across North America are showing drastic population declines. Many of these species are migratory—spending summer months in Canada and winter months in the southern United States and Central and South America. Continent-wide monitoring initiatives, such as the Breeding Bird Survey (BBS), collect valuable data to monitor North American bird species; however, there are numerous species that have not been sufficiently monitored.

Both observatories use standardized mist netting and banding techniques to count the birds as they make their migratory journey. A series of mist nets are opened daily and operated for six hours beginning at sunrise. All birds captured are extracted and banded by qualified individuals in adherence to the North American Bird Banding Code of Ethics.

Then they gather data including the age, sex, wing length, fat score and body mass of each bird, plus plumage characteristics like molt sequence. In addition to being sites scientific data collection, the observatories serve as educational centres where the public can learn about boreal bird migration and the collection of scientific data. Over the long term, the studies currently underway can be analyzed to determine population trends for species migrating through the southern Yukon.

The Canadian Wildlife Foundation recently donated $5,000 to David M. Bird, Professor of Wildlife Biology and Director of the Avian Science and Conservation Centre, to research the potential benefits of using...