How many species in Canada are endangered or at risk? It’s impossible to answer that question with an exact number, just as it’s impossible to know precisely how many species of wildlife there are. But this much is certain: the 35-year-old Committee on the Status of Endangered Wildlife in Canada — the national body of scientists and other experts that assesses wildlife species — currently gives at-risk status to 640 species. Of those animals, the federal Species at Risk Act lists 492, providing the basis for recovery and management planning. Here, we break down those numbers and present a snapshot of what we know for certain about Canada’s species at risk.

At-risk wildlife are also categorized in 10 taxonomic groups on the SARA list. This graph illustrates the percentage each group makes up of the total of officially at-risk species. 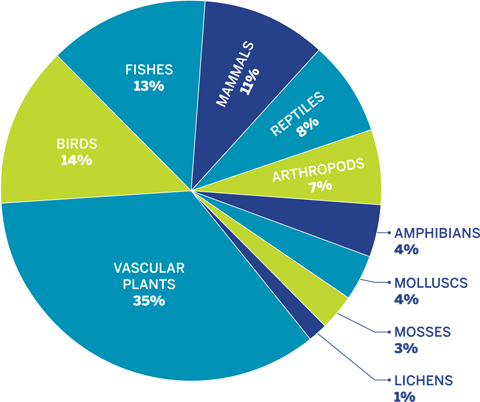 The Species at Risk Act lists wildlife in one of four categories. Each is defined by the degree of threat to a species’ survival. The number beside each level below is the total number of species in that category under SARA.

This chart indicates the number of species in each of the 10 taxonomic groups from the SARA list that are of Special Concern, Threatened, Endangered or Extirpated.

The SARA list includes 23 extirpated species (including the six depicted below). Each extirpated species still survives in another part of the world, so the possibility exists of reintroducing them. In fact, a recent reintroduction of the extirpated black-footed ferret in Saskatchewan’s Grasslands National Park has been relatively successful to date.