The End of Canadaâs Winter Games 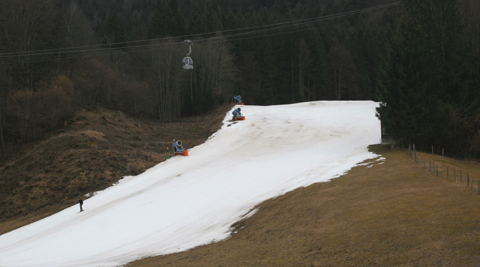 Approximately 4.2 million Canadians brave the nippy weather for the love of winter sports. And with the 2010 Olympic Winter Games just around the corner, Canadians are chomping at the bit to lace up their skates or hit the slopes in the New Year. But climate change is threatening to end all our winter fun.

In the last century, we’ve seen our thermostats rise 0.74°C. And at the rate we’re going, we can expect that number to climb. According to the Intergovernmental Panel on Climate Change, if we don’t take major efforts to drive down greenhouse gas emissions, we could see the number grow between 1.8°C to 4°C before the 21st century is up. The culprit of this spike in temperature? Us. According to the World Resources Institute, industrialized countries, which constitute only one-fifth of the world’s population, currently account for 75 per cent of the world’s greenhouse gas emissions. We are creatures of comfort. And our modern day conveniences and luxuries have driven greenhouse gas emissions through the roof, resulting in a warming climate. We’re already seeing the effects: thinning lake ice, less snowpack and a shorter snow and ice season. Over the past 50 years, the snow season of the East and West Coast has declined by two to five weeks, according to Environment Canada. This could mean the end of winter sports as we know them.

How could a changing climate affect Team Canada?

With seven World Cup podium finishes under her belt, Brydon would have to retire her skis should climate change continue at its current pace. According to the David Suzuki Foundation, global warming could cut our ski season in half or more by the end of the century. With snowpack building up later in the winter season and melting quicker, and more rain than snow hitting the slopes, snowpack will be on a downward spiral. In the next 40 years, Banff could lose between 59 and 94 per cent of its ski season, Northern Ontario could lose 36 per cent and Southern Ontario could lose 46 per cent — forcing ski resorts to rely heavily on snowmaking. More than two million Canadians hit the slopes every year, racking up major sales for the 250 ski resorts in Canada. For downhill skiing alone, the resorts make $839 million every year. But should the trend of warmer winters continue, they could be relying on a mere 100 days of good skiing conditions a year, putting their resorts in jeopardy. However, if we work together to fight climate change, keeping the thermostats below 2ºC, Brydon and ski junkies across the nation could keep their favourite winter sport alive and well for years to come.

Finishing second at the 2009 World Championships, Chan’s gleaming skates could turn rusty if the temperature continues to rise. While autumn’s cooling temperatures have generally remained steady, spring has come earlier in the last 50 years resulting in earlier melting and ice breakup. A 2007 study found that Canadian lakes are freezing over six days later and melting nine days earlier (compared to 50 years ago). Snowfall shields ice from sunny days and warm weather allowing it to keep cool, but with snowfall on the decline, rivers, ponds and lakes are at a higher risk for melting sooner – making outdoor skating and hockey next to impossible. To date, the Rideau Canal has been open to skaters for 61 days a year; however, as climate change rears its ugly head, the canal may only be open for a single week by the end of the century. But it’s not all bad news! If we work hard to curtail climate change, we could preserve over 70 per cent of ice time.

In the 2006 Olympics, Goldsack finished 31st in the sprint cross-country; in 2010, he could be standing tall on the podium. Like Goldsack, more than 870,000 Canadians – two-thirds of which are from Central Canada – strap on their skis and hit the great outdoors. While cross-country requires less snow than alpine skiing, it still needs a minimum 15 centimetres of snowpack. However, Environment Canada reports that Eastern Canada’s snow season has dropped by two weeks, while Western Canada’s has decreased by five weeks over the last half century. Scientists predict that by 2020, the cross-country ski season in the Gatineau Park could be decreased by 50 per cent; by 2050, it could be abolished entirely. But should Canada adopt methods to stop climate change in its tracks, we could save over 80 per cent of the cross-country ski season.

Climate change is only out of our hands if we don’t get our hands dirty. Here are four ways to get involved!