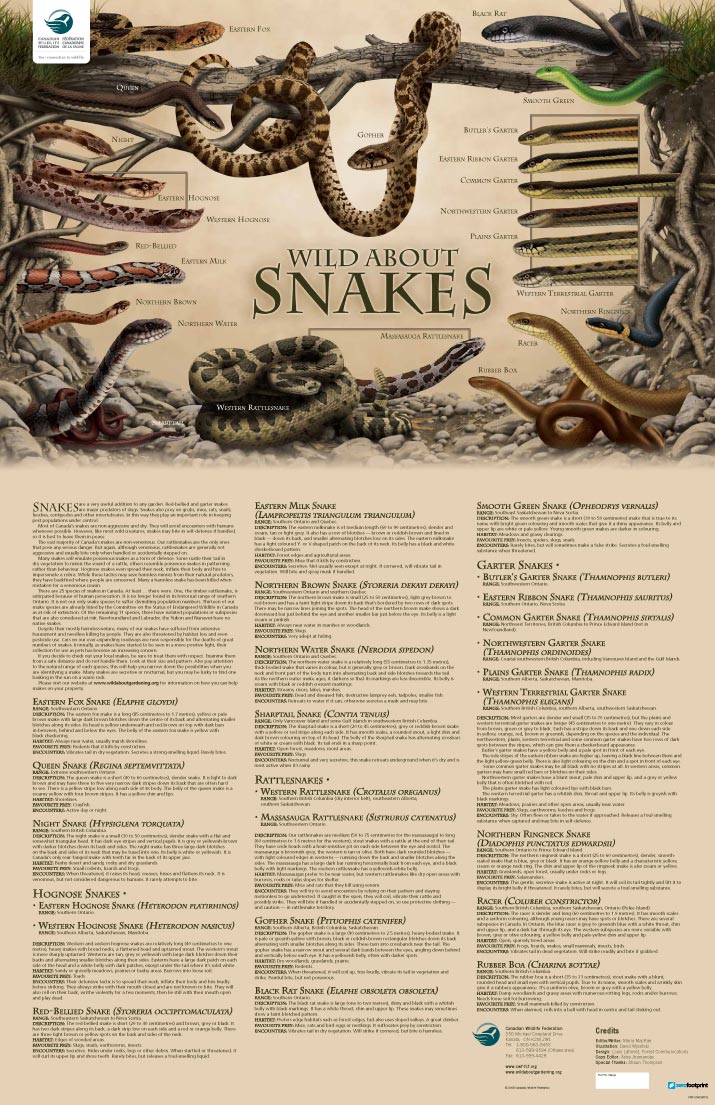 Contrary to their fearful reputation, snakes are actually a very useful addition to any garden. Garter snakes, for example, are one of the major predators of slugs. Snakes also prey on grubs, mice, rats, snails, leeches, centipedes, and other invertebrates. In this way they play an important role in keeping pest populations under control. In fact, they help to maintain the health of any garden that welcomes them.

anada has 25 species of snakes, although one, the timber rattlesnake, is now extirpated. Once found in southern Ontario, human persecution killed it off. Of the remaining species, 12 are listed by COSEWIC as at risk of extinction. Three more species have isolated populations or subspecies that are also considered at risk

Most of our snakes are non-aggressive and shy. They will avoid encounters with humans whenever possible. In fact, you are more likely to hear them rustling through the vegetation as they speed away than see them. However, snakes, like most wild creatures, may bite in self-defence if handled, so it is best to leave them in peace.

The vast majority of Canada's snakes are non-venomous. Our rattlesnakes are the only ones that pose any serious danger — the Massasauga in southwestern Ontario and the Western rattlesnake in southern British Columbia, southwestern Alberta, and southern Saskatchewan. Though venomous, these snakes are generally not aggressive. They will try to avoid encounters with humans and won't attack unless provoked or cornered. If handled or accidentally stepped on, they will bite; so protective clothing and caution should be used in rattlesnake territory. Rattlesnake bites are rare in Canada, probably due to their limited ranges.

The night snake, Canada's only rear-fanged snake, does have venom, but it is not known to be dangerous to humans. It is a small and very rare snake found only in an extremely limited area of southern BC.

Many snakes will emulate poisonous snakes as a form of defence. The black rat snake, for example, will rattle its tail in dry vegetation to mimic the sound of a rattle. Milk snakes resemble poisonous copperheads in patterning. Gopher snakes will coil and hiss loudly when alarmed to imitate rattlesnakes, while hognose snakes spread their necks, inflate their bodies and hiss to impersonate a cobra. While these tactics may save them from their natural predators, they have backfired where man is concerned. Many a harmless snake has been killed when mistaken for a more deadly cousin.

Despite their predominantly harmless nature, many of our snakes have suffered extensive harassment and needless killing by people. They are also threatened by habitat loss and fragmentation, loss of hibernation or nesting sites, and even pesticide use. With our ever-expanding roadways, cars are now responsible for the deaths of great numbers of snakes as they travel to and from hibernation sites or lay coiled on the road to soak up the sun's heat. Ironically, as snakes are beginning to be viewed in a more positive light, collection of them, for use as pets, has become an increasing concern.

If you decide to check out your local snakes with the help of a field guide be sure to treat them with respect. Examine them from a safe distance without handling them. Look at their size and pattern. Snakes can be divided into three general groups — striped, blotched, or no patterning. Also pay attention to each species' natural range because that will help narrow down the possibilities. Many snakes are secretive or nocturnal, but you may be lucky to find one basking in the sun on a warm rock.

To help out your local snakes consider the following tips: