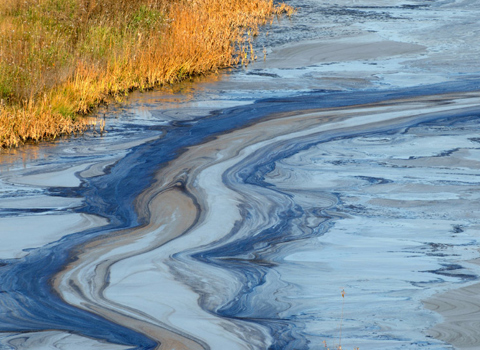 We have all been following the news reports about the oil spill in the Gulf of Mexico that continues to make daily headlines. Millions of gallons of oil have gushed into the Gulf Coast so far, and efforts to slow or stop the flow of oil into these precious waters have been fraught with complications and failure.

Clean-up crews are vigilantly working to contain the spread of oil. Conservation groups, volunteers and government agencies are collaborating on wildlife rescue efforts. The National Wildlife Federation is establishing Gulf Coast Surveillance Teams to monitor the coastline for wildlife in distress.

Initial estimates were that 5,000 barrels, or nearly 800,000 litres, of crude oil were leaking into the waters every day; however, more recent reports indicate that those numbers could be much higher. And as the areas affected by the spill continue to grow, so does the potential impact on this complex and delicate ecosystem. The Gulf of Mexico boasts more than half of the wetlands on the continental U.S.A. Along with other sensitive estuaries, beaches, coastlines and waters, the Gulf is home to hallmark wildlife such as seabirds, dolphins and sharks.

Risky Business
More than 400 species are at dire risk from the toxic ooze flowing into the Gulf waters and shorelines. For many birds, fish, turtles and marine mammals, the oil spill happened right at the height of their spawning and nesting period, making the situation even graver. Among those in peril are:

Sea Turtles
For five of the seven species of sea turtles, the Gulf is where they live, migrate and nest. The Hawksbill, Green, Leatherback, Loggerhead and Kemp’s Ridley are all listed as either threatened or endangered; the Kemp’s Ridley is the world’s most endangered sea turtle. Oil can have damaging effects on sea turtles at every stage of their lives. Eggs contaminated with even the slightest bit of oil can fail to hatch or produce ill or deformed hatchlings. Because of their small size, hatchlings that make their way from the beach to the water can become overwhelmed by an oil slick. Young turtles tend to swim on the water’s surface, encountering oil as they go that can poison or coat them. Finally, adults can ingest oil as they surface for air and sometimes even feed on tar balls.

Birds
Birds are particularly vulnerable to the effects of the oil spill. When a bird’s feathers become covered in oil, it makes it impossible them to fly or to keep warm, often leading to hypothermia. As they try to preen, they ingest oil, which can result in serious health problems such as kidney and liver damage and sometimes death. The coastal wetlands are the habitat of birds such as gulls, egrets, terns and migratory songbirds. The Brown Pelican, Louisiana’s state bird, was taken off the endangered species list in 2009 and had already suffered challenges from storms during past seasons. Their breeding season had just begun with the oil spill occurred. With a low reproductive rate, eggs incubating in oil will create a significant threat to this iconic state symbol.

Fish and Shellfish
Fish and shellfish are an important part of the food chain for wildlife in the Gulf of Mexico. When wildlife consumes toxic substances, the contaminants can be passed on to their predators. With the principle spawning season underway, the oil spill risks hindering the survival of the next generation of fish and shellfish. Fish eggs and larvae cannot move and are therefore unable to avoid the oil spill as it spreads. The western Atlantic bluefin tuna’s only spawning ground is in the Gulf. Sought after for sushi and sashimi, the Atlantic bluefin population has been in steady decline and it is considered to be in serious danger of becoming extinct.

Marine Mammals
Because they spend most of their time out at sea, marine mammals are likely to be among the first species to come into contact with the oil. As they have to surface to breathe, they can easily come up for air through the slick. They also run the risk of ingesting large amounts of oil by feeding on contaminated prey. The chemical dispersants used to break down the oil can also harm marine mammals by causing burns, infections and damage to their respiratory or gastrointestinal tracts.

No Water, No Life, No Exceptions
While it is too early to truly gauge the full effects or long-term consequences of the oil spill on wildlife and its habitats, we can assume with some certainty that the negative impact will be felt for years to come. And, the effects can be far reaching. The oil spill spreads farther and farther every day, leaving more disaster in its wake as it grows.

Water conservation remains one of the key pillars for CWF. We are working to ensure that our Canadian waterways and their protection are front and centre on the political and educational platform.  Many of you added your voices to our campaign against changes to the Navigable Waters Act. CWF Blue Schools across the country are educating our youth about the lifeblood that is water.

From June 8 to 14, we will celebrate Rivers to Oceans Week. Rivers to Oceans Week reminds us that safeguarding the health of all water — local springs, creeks, streams, lakes, rivers, wetlands and even groundwater — flowing through our watersheds also improves the quality of Canada’s oceans. While most of us are bystanders to the oil spill in the Gulf of Mexico, there is much we can do to at home to change the tide for our ever-more-challenged waterways. In Canada, we are blessed with a great abundance of water, and it is our obligation and privilege to protect this life source for the world around us.

This year, Rivers to Oceans Week will focus on the leatherback seaturtle, one of many aquatic species currently on the endangered species list, and draw attention to the threats that are wreaking havoc on the lives of marine culture and its increasingly disrupted habitat.  Human activity – from commercial fishing to recreational water use, urban waste and pollution – greatly impacts the chance of survival for many aquatic species. We all have a part in conserving the waters that aquatic species call home. Celebrate Rivers to Oceans Week by making your pledge to ensure that safe and secure waters, our lifeblood, are there for generations to come.