Larry the Loon Lives On 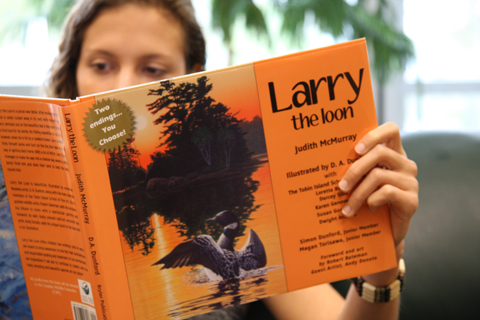 Few people would stay impassive at the sight of an injured bird and the family of Dr. Bernie Gosevitz of Port Carling, Ont., was no different. They spent several weeks during the summer of 2010 caring for a loon that had been so badly injured by a careless boater that it could not fly or hunt for itself. Unfortunately, the loon’s injuries were so extensive that it could not recover and eventually had to be euthanized.

But the story does not end there. It lives on in a new children’s book, Larry the Loon, by Toronto author Judith McMurray, author of titles including Draggy’s First Flight and Nanasaurus and the Nanamobile, and published by Bryler Publications. Better yet, the book has already sold more than 5,000 copies — making it a bestseller in Canada — with proceeds being donated to the Canadian Wildlife Federation.

Larry the Loon tells the story of a proud father loon that goes on a fishing expedition and, after being hit by a boat, cannot hunt for himself or go back to his family. Luckily, he is found by a caring family that feeds him for weeks before realizing the bird, by then known as “Larry,” won’t survive the winter on the lake. So the family takes him to a wildlife centre.

Here, the book takes an unusual turn: it offers readers the choice of two endings. In one, Larry heals, returns to the wild and rejoins his family. In the second ending — based on the Gosevitzes’ actual experience — the vet at the wild centre is unable to help Larry and forced to put him down.  Dr. Gosevitz suggested the multiple endings for the story. “The book has two main [roles],” he says. “It will educate children about the loons and what they can do to help, and it gives parents an opportunity to talk to their kids about compassionate euthanasia.”

Larry the Loon is also special for its illustrations, which were contributed by several artists, including Dr. Gosevitz’s wife, Susan. Each image is a personal interpretation of Larry’s life based on the hundreds photographs taken of him while he was alive. Among the contributing artists are Sun Media cartoonist Andy Donato and wildlife artist Robert Bateman. Artists from the Tobin Island School of Fine Arts also contributed, including Darcey Sills, Loretta Rogers, Karen Genovese, Dwight Aranha, Simon Dunford and Megan Torisawa. Some of these artists had already taken part in a similar project, donating their time and skills to the compilation of Bryler Publications’ last charity book Chucky the Lonely Inukshuk, also by McMurray. Each page of this book presents a different artist’s celebration of inukshuks, with the proceeds benefiting the Juvenile Diabetes Research Foundation.

In the case of CWF, the money raised through sales of Larry the Loon will be used to support various conservation and environment programs. When the Gosevitzes started the project, they had already chosen the charity. “My wife is a naturalist and nature painter, and we are huge nature lovers, so it was a natural thing to do,” Dr. Gosevitz says. “It’s pretty rewarding to know that all this hard work will help the Canadian Wildlife Federation.”