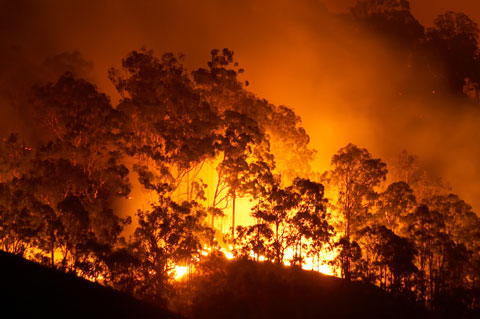 With their destructive effect on Canada’s western landscape, Alberta and B.C.’s wildfires have dominated Canadian headlines this summer. It is hard to see what, if any, good can come from such devastation. But it may surprise you that, despite its seeming fury, fire is a key factor in the continuation of maintenance and the diversity of Canada’s forest ecosystems.

In Canada, the forest fire season starts in April and continues right through to October, peaking in June, July and August. Although statistics on forest fires vary from year to year, on average over 9,000 forest fires burn approximately 2.5 million hectares of land in Canada each year. Every fire evolves differently; some extinguish quickly, whereas others burn for weeks and ravage hundreds of square kilometres. What fuels the fire, the landscape and the climate and meteorological conditions all help determine how severe the fire becomes.

While human-caused fires (ignited by activities like abandoning cigarettes and campfires) crop up more frequently, they often start close to communities, where they are quickly detected, reported and extinguished. Lightning is the primary natural cause of forest fires, accounting for 45 per cent of all fires in Canada and a whopping 81 per cent of the total area burned. Fires sparked by lightning often occur in remote locations in the western and northern regions of Canada and are often difficult to reach with fire suppression equipment.

Forest fires are natural phenomena and play a significant role in shaping Canada’s landscape and ecosystems. They promote regeneration by removing older trees in the forest that may be the most susceptible to insects and disease and remove debris accumulated on the forest floor, which in turn promote new seedling growth and diversification of the species.

Some species of trees are actually fire-dependent, meaning they need fire to survive. For example, the jack pine needs heat from fire to melt its cones — only then can its seeds be released. Thousands of seeds scatter onto the ground and grow into solid pines.

Fire also distributes vegetation, providing food and shelter and helps wildlife adapt to its new habitat. For example, the black-backed woodpecker’s (Picoides arcticus) population can increase by up to 50 times after a fire! This particular species of woodpecker travels in search of insects like bark beetles, which can be readily found feeding on burned wood. Another species that benefits from fire is the Canada lynx (Lynx canadensis), which uses mature conifers for cover and hunts in recently burned areas that house its favourite prey, the snowshoe hare (Lepus americanus). Moreover, moose and elk rely on vegetation provided by new growth.

Although forest fires may benefit several species, many birds, mammals and insects are dependent on old growth forest and become displaced. Several tree species, such as the balsam fir and white spruce, will not survive in areas that burn frequently because they need longer intervals between fires to reach reproductive maturity. Some plant and animal species populations may take years to return to their original levels, while other species will never be able to live there again.

Although there is still much discussion as to whether or not to include the carbon released from natural sources, like forest fires, into the overall climate change debate, we must acknowledge that climate change can have harsh consequences.

A healthy forest is considered a carbon sink, where carbon emissions are taken out of the atmosphere and absorbed by trees. When a forest fire occurs, the carbon that was once stored is released back into the atmosphere, often in the form of carbon dioxide, which can then aggravate patterns of global warming and shift large amounts of carbon into the atmosphere.

The amount of vegetation affected by fire in the Canadian boreal forest has doubled in the past several decades. As global warming continues to throw seasonal temperatures out of whack, and lightning strikes are expected to skyrocket by 44 per cent, experts believe wildfires will scorch up to 78 per cent larger areas within the next 50 years.