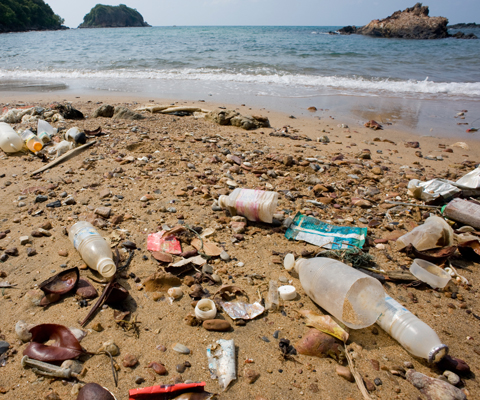 Approximately 260 million tonnes of plastic is produced every year, 10 per cent of which finds its way to our oceans. Nearly 80 per cent of marine litter is ushered into the sea via wind and runoff — litter from our roadways make its way to our streams and rivers and eventually gets dumped into our oceans. The remaining debris that enters our waterways comes from ships.

So what happens to the plastic once it gets in the water? The carbon dioxide in the water and the sun’s heat and rays cause the plastic to break down into tinier and tinier pieces. But don’t be mistaken. The plastic doesn’t go away. It just gets smaller. These pieces can weigh as little as a tenth of a paper clip. That’s mini!

Watery Wastelands
A “garbage patch” is created when marine litter is whirled together by a vortex of currents. There are currently five gyres in our oceans: the North and South Pacific, the North and South Atlantic and the Indian Ocean. These gyres make up 40 per cent of the sea.  That’s 25 per cent of our planet where plastic garbage is accumulating!

The North Pacific garbage patch is a moving gyre twice the size of Texas and located between California and Hawaii. The sheer size of this wasteland is astounding: there are 750,000 pieces of plastic per square kilometre, and nearly 70 per cent of the plastic amalgamated at the site has sunk under the water. Researchers at the University of Hawaii found that the trash that escapes the vortex due to changing currents end up strewn across the Hawaiian Islands; the rest ends up in the Pacific garbage patch.

The most recent gyre found is the North Atlantic garbage patch, located hundreds of kilometres off the North American coast. Researchers at the Sea Education Association found 200,000 pieces of plastic per square kilometre, and the plastic bits can be found as deep as 20 metres below the surface.

Pass the Plastic, Please
From rubber duckies to tampon applicators, everything we toss in the trash has a gravesite. If it doesn’t end up in a landfill, it inevitably finds its way to the ocean. And as the plastic breaks down into smaller and smaller bits, it often ends up in the bellies of wildlife. Fish, for instance, are unable to distinguish these pieces of plastic from plankton, and readily chow down on it. According to the U.S. National Oceanic and Atmospheric Association, up to 100,000 marine mammals have trash-related deaths each year. Moreover, upwards of 50 per cent of marine reptile species are affected by plastic litter, and a million seabirds become entangled in plastic nets or choke on plastic debris every year.

Albatrosses living on the isolated island of Kure Atoll in the Pacific Ocean (close to the Pacific garbage patch) have been found to gobble down five tonnes of plastic a year. Every year, 500,000 albatross chicks are born, and every year approximately 200,000 die. While plastic isn’t the only culprit that’s led these birds to their untimely death, they’re certainly gobbling down an astounding amount of the toxic substance. Researchers believe that the birds are eating garbage that is attached to flying fish eggs (one of their dietary mainstays). The plastic can puncture and obstruct their intestinal tracts and may also emit toxins. Researchers at the University of Hawaii studied the pellets regurgitated by the chicks living in Kure Atoll and found 10 times more plastic than those of chicks living closer to the city of Oahu. However, researchers argue that so long as they are regurgitating the plastic, they have a fighting chance. The chicks that ingest them are more likely to be in danger.