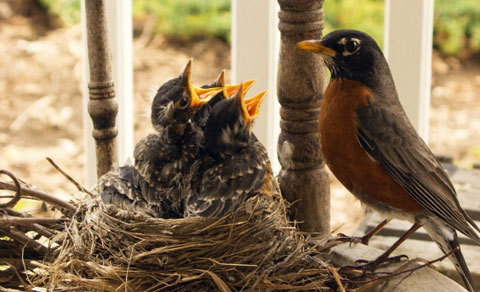 In just a few short weeks, songbirds will come flitting back to our backyards, searching for scraps to build their nests. But what happens when it’s built? How do females bond with their chicks? How do chicks get their mother’s attention? We’ve got all the answers. Just keep reading!

Why do some birds lay one egg while others lay five per clutch? A University of California San Diego study set out to find out just that. Researchers examined the clutch sizes of 5,290 bird species and found that birds with a short life span or a low survival rate tend to lay more eggs per clutch. Birds that have longer life spans, on the other hand, lay fewer eggs per clutch but spend more time nurturing the hatchlings.

It seems environment, health, nutrition and predation are key factors behind these clutch sizes. Tropical birds generally have smaller clutch sizes due to a relatively stable climate plus with a high predation rate, the fewer eggs you have in one basket, the better for the species. Climate change is threatening to throw all this out of whack. What will happen to these tropical birds, that have adapted to predictable climates, when climate change rears its ugly head and sends temperature fluctuations their way? We’ll have to wait and see how it will affect clutch sizes and these species as a result.

The mother child bond is created before the egg is even hatched. According to research conducted by the Zoology Department at the University of Cambridge, female canaries actually communicate with their young before they’ve hatched by changing the conditions within the egg. In turn, chicks learn what kind of life they’ll lead once they hatch.  If chicks get a message that their parents will be generous, they’ll beg more once they’re hatched. But if they get the message that their parents won’t be as attentive, they’ll gain more weight in the egg and won’t be as demanding after they’ve hatched.

It’s Getting Hot in Here

Although most songbirds lay one egg per day, they don’t start sitting on them until the last or second-last egg has been laid. That way, they can time when they start to hatch. A Cornell Lab of Orinthology study found that bluebird eggs are usually exposed to temperatures below 75ËF, but once the female tucks them underneath her, their temperatures skyrocket to 96ËF to 105ËF.

However, if eggs are exposed to warmer weather (between 75ËF and 96ËF) for longer periods of time, chicks are at risk of abnormal development and even death. In large clutches it’s usually the first eggs laid that are more likely not to hatch.

Once the eggs are hatched, parents work overtime trying to get all their little ones fed. But how does a hatchling ensure they get enough to eat? They use their beaks and a good set of pipes! According to BMC Ecology, Jackson’s golden-backed weaver parents are able to distinguish each chick’s call. Researchers found that the hungrier a chick got, the more it changed the length and pitch of its calls and the more unique their calls became.

MIT researchers found that songbirds are equipped with two brain pathways, but only one is fully developed at birth. Young songbirds must wait it out while the other matures – hence the babbling. It allows them to make mistakes and learn from them – a critical step in learning how to sing correctly.