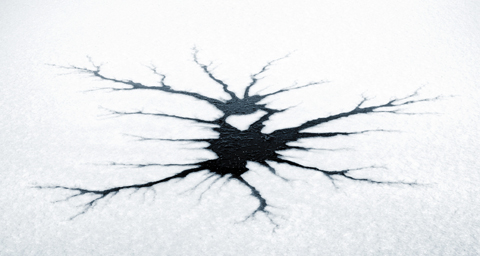 Evidence of climate change has been documented around the world. Loss of Arctic sea ice, altered precipitation patterns, more drought, increasing ocean temperatures and changes in food availability for migratory species all contributed to the 2007 assertion by the Intergovernmental Panel on Climate Change that the changes to the climate system are “unequivocal,” and these changes are “very likely” caused by human activities. In developed nations like Canada, the main source of greenhouse gas emissions is the combustion of fossil fuels. Developing nations’ emissions are largely from the removal or burning of forests.

Although the atmosphere may appear limitless, in reality, it is a thin protective layer that envelops our planet. Human activities are changing the composition of our atmosphere, increasing the amount of carbon dioxide and other gases to levels that are already altering the climate system.

The Intergovernmental Panel on Climate Change (IPCC) is an apolitical, scientific and intergovernmental group of experts that “reviews worldwide research, issues regular assessment reports and compiles special reports and technical papers.” Their most recent report, released in 2007, states that global temperatures cannot rise more than 2°C, and that the concentration of carbon dioxide in the atmosphere should not exceed 450 parts per million (already we’re at 391 ppm) if we are to avoid worst-case scenarios. The conclusions of the IPCC have been the impetus for global protocols, action and scientifically based reduction targets.

How Canada Stacks Up

Canada ranks dead last among the G8 countries in terms of climate change action. The impacts of climate change – realized and predicted – in areas (and associated industries) such as the Great Lakes, the Prairies and the Arctic should be enough of a motivator to instill ambitious greenhouse gas reductions and adaptation plans that protect nature and its processes, but this is not the case. The federal government has declared it is taking action on adaptation and climate change issues, but ironically the environment itself is not a focus of adaptation. Adaptation efforts are nearly exclusively geared towards people, property, infrastructure and human health. While this is clearly important, the fundamental role that the environment plays in our livelihoods, health, recreation and identity is grossly undermined.

CWF is advocating that the federal government