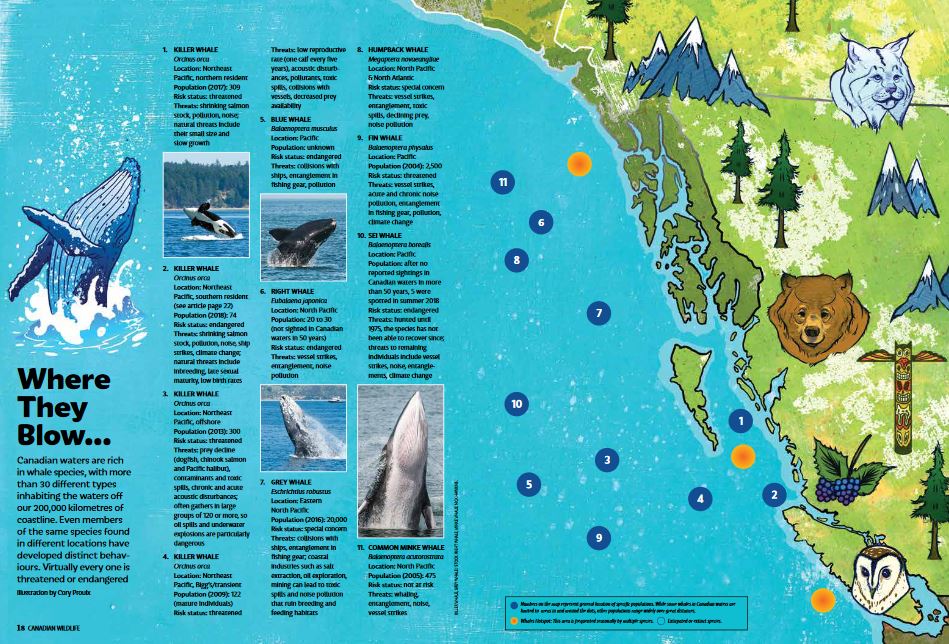 Whales and other cetaceans worldwide number more than 90 species in all, in oceans, lakes and rivers.

Canada alone is home to more than 30 different species of whales and dolphins, living in seven million square kilometres of ocean off this country’s 243,792-kilometre coastline, the longest of any nation. “Canadian” whales can be found in the Pacific waters off British Columbia from Vancouver north to Alaska, in the North Atlantic from Nova Scotia to the Arctic Circle and in the vast northern waters in and around Nunavut’s Arctic Archipelago. Whales are found too in the major inland seas of Hudson Bay, James Bay, the Strait of Georgia and the Gulf of St. Lawrence.

Whales, dolphins and porpoises are all within the same group of animals called cetaceans. These air-breathing mammals are found in all oceans of the world, including Canada’s three oceans.

As charismatic as any creature found in nature, whales have played a central role in the human imagination through history. It is not only their sheer size that captivates – the enormity of a Blue Whale measuring up to 33 metres and weighing 100 tonnes is a sight to behold, as is the astonishing grace and power of a massive Orca breaching the ocean’s surface – but also their obvious intelligence, their sophisticated methods of close- and long-range communication and their complex social structures (about which we still have much to learn).

Cetaceans are like humans: warm-blooded mammals that breathe air and nurse their young. They are carnivores which, depending on the species, rely on everything from vast quantities of tiny plankton to large marine mammals for sustenance.

The easiest way to tell the difference between these animals is whether they have teeth or not. Cetaceans are subdivide into mysticetes (baleen whales) and odontocetes (toothed whales, dolphins and porpoises).

Baleen whales have a pliable comb-like strainer called baleen on the upper jaw which filters huge intakes of sea water capturing tiny krill, microscopic zooplankton and small fish. Because of their enormity, many species of baleen must be constantly eating to keep up with caloric demands. These types of whales, which include blue, right, bowhead, gray, right, and sei whales, tend to travel in small numbers and even occasionally alone. Because of certain behaviours, as we will discuss below that has been seen so dramatically of late in Canadian waters, baleen whales are particularly vulnerable to ship strikes.

Toothed whales on the other hand use echolocation and collaborative hunting techniques to track, capture and eat their prey, consisting primarily of fish but also squid and many types of marine mammals, large and small. Among the toothed whale species in Canadian waters are Beluga Whales, Sperm Whales, Orca, Sowerby’s Beaked Whales and Narwhals.

Reptiles can be found on the Pacific and Atlantic coasts of Canada in the form of sea turtles! Sea turtles migrate to Canadian waters to feed, mostly on jellyfish during the summer months.

I found a dead whale. I'm so sad and I have no idea what to do. Should I call the police?

Every year, more than 1,000 marine animal incidents are reported in Canada. Sean and Tonya will discuss the importance of responding to marine animal emergencies, and the essential conservation role you and other...