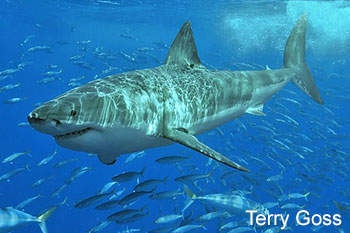 • Up to five tons in weight.

• Found in temperate waters of the world.

• First dorsal fin is rounded on top, set further back on body and at a 45° degree angle.

• The second largest fish in the world (second to the whale shark), but eats plankton as a filter feeder.

• Up to eight metres in length.

• Circumglobal distribution, up to sub-polar regions.

• Trailing edge of the first dorsal has unique markings or serrated edge.

• Although popularly feared as the Great white shark, scientific research is reducing their status of mindless killing machines.

• Endangered in Canada under the Species at Risk Act

• Found in the northern temperate oceans of the world.

• Blue-grey in colour, with a distinctive white patch on the trailing edge of the first dorsal fin.

• Caudal (tail) fin has both primary and secondary keel.

• Second dorsal is much smaller than the first dorsal; First dorsal is rounded in juveniles.

• Shortfin makos are the fastest of all shark species, reaching speeds of 74 kilometres an hour.

• Up to six metres in length.

• Found in temperate oceans of the world.

• Second dorsal fin is much smaller than the first dorsal fin.

• Deep indigo blue colour with distinct countershading; dark blue on top, bright blue on the sides and white underneath.