While most spiders in Canada are not considered a health threat, for some reason or another they still have the ability to frighten many of us. This is an undeserved reputation that hopefully they will soon be able to avoid.

Goldenrod spiders, also known as flower spiders, are medium-sized arachnids with short, flat and wide bodies. Females are largest at six to nine millimetres, whereas males measure between three and four. These spiders can change their body colour (although it takes a couple of days) to blend into the white or yellow flower in which they wait for prey. Females are lighter coloured — white or yellow — with reddish stripes along the sides of their abdomen. In contrast, males are darker and more reddish-brown in colour.

The goldenrod spider is part of the crab spider family. Its two front pairs of legs are longer than the others and are held out to the sides, like a crab, to help it capture and hold prey. 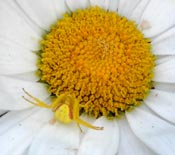 Common throughout North America, including southern Canada, goldenrod spiders can be found in gardens, meadows, wetlands and roadsides. They are usually associated with white and yellow flowers including goldenrod, daisy, trillium and white fleabane.

Goldenrod spiders do not use their silk for building webs, but females use it to protect their eggs. After fertilization in the spring, a female will lay her eggs in a sac made out of a folded leaf that she then wraps in silk. She soon stops eating and usually dies within three weeks.

Goldenrod spiders hunt for prey using a sit-and-wait technique. They patiently wait on flowers, on the ground or even on fences, until suitable prey lands. Because they are so well camouflaged against their floral backgrounds, butterflies, bees, flies and grasshoppers often don’t realize this spider is near. When prey approaches, the goldenrod spider uses its front legs to grab onto its prey and its venomous fangs to paralyze it. The spider then sucks the fluids from the insect’s body.

While the goldenrod’s venom allows it to capture and paralyze prey larger than itself, its venom is not strong enough to be dangerous to people. In fact, unless they have been physically harmed, it is very uncommon for them to even bite people.

Spiders actually have many beneficial qualities. Because they feed on invertebrates, they help control populations of pest insects. They are also an important source of prey for birds and amphibians. Sensitive to environmental changes, spiders are also important indicators of environmental health.

Avoid the use of pesticides to make your backyard friendly for the goldenrod spider. In return it will help control those unwanted insect pests. Also, incorporate native white and yellow flowers into your garden such as goldenrod, fleabane and trillium. Before long, you will be able to identify the goldenrod spider as one of your friendly backyard creatures.