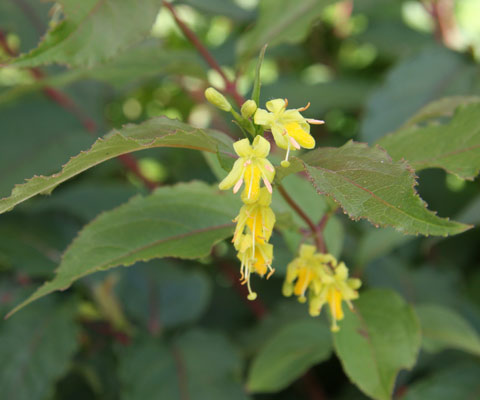 Description:
The northern bush honeysuckle blooms during the summer with small clusters of tubular yellow flowers found in leaf axils (where the leaves join the stem) and at the tip of the stem.

The flowers turn orange-red once pollinated by bees, butterflies and other pollinators that make use of the plantâs nectar and pollen.

The stems and new leaves are typically reddish, but the bright fall colours â with leaves ablaze in shades of yellow, orange and red â are more inclined to catch the eye. The leaves are arranged in opposite pairs along the stem and are pointed at the tip with fine serrations (teeth) along the margin (edge).

Photo Gallery:
Range: The Northern Bush Honeysuckle is native from eastern Saskatchewan right across to Newfoundland.

The flowers turn orange-red once pollinated by bees, butterflies and other pollinators that make use of the plant’s nectar and pollen.

CWF’s wildlife-friendly demonstration garden showcases several of Canada’s native plants. While some are showstoppers with gorgeous blooms, we have many that quietly grace the gardens with their attractive foliage or fall colours. One such plant, the northern bush honeysuckle, grows in our drought bed. 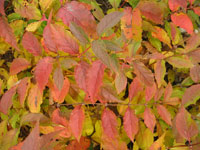 The northern bush honeysuckle grows in a variety of soils, either in sun or partial shade. It typically reaches one metre and will slowly spread outwards. If the honeysuckle is grown in very fertile soil, however, its suckers can spread more quickly. If more plants are what you are after, snip branches and root in water or place in moist soil after applying rooting compound to the open end. Alternatively, collect and plant seeds as they ripen, when the seed pod is dry and brown and the seeds inside are blackish. 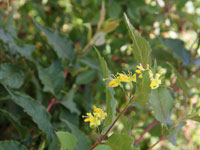 While the northern bush honeysuckle can be attractive in formal garden beds, it is especially useful when allowed to spread because it stabilizes soil on slopes with its extensive root system. Perhaps it will be useful on your property!