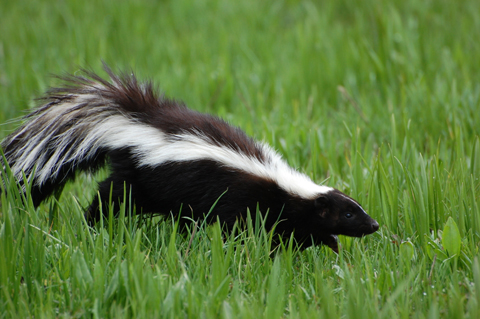 Description:
The striped skunk, a member of the weasel family, is about the size of a cat, but has a stout body, small head, short legs, bushy tail and thick, black, glossy fur. The thin white stripe down the centre of the face forks at the shoulders and continues as a white stripe along each side of the back. Tail is mostly black, but stripes may extend down it, usually to a tuft of white at the tip.

The skunk is one of the most useful small mammals inhabiting Canadaâs mixed farmlands, grasslands and forests because it helps control pests such as mice, grubs and larvae.

On average a skunk weighs 3.25 kilograms and is approximately 57.5 - 80 centimetres in length. In the wild a skunk is estimated to live 3 years but in captivity they can live up to 15 years.

Range: Central Mexico to Nunavut and the Northwest Territories; from the Maritimes to west-central British Columbia.

Habitat: The skunk prefers open areas of mixed forests and grasslands and has very little fear of humans, so it has benefited from the new habitats created by the opening of the forests that accompanied settlement and agriculture.

Skunks generally live in the abandoned dens of woodchucks, foxes, or other mammals of similar or larger size and only occasionally excavate their own dens. They will also use stumps, rock piles, or refuse heaps, or will even set up housekeeping under a house or porch or in a cellar. The latter practice is especially common in farming areas.

Diet: Skunks are truly omnivorous, eating a wide variety of foods. They eat insects, mice, shrews, ground squirrels, young rabbits, birdsâ eggs, and various plants. During the autumn and winter they eat about equal amounts of plant and animal foods, but eat mainly insects in the summer. Skunks are especially fond of grasshoppers, crickets, and insect larvae such as white grubs, army worms, and cutworms.

Skunks begin to breed in late February or March, when they emerge from their dens, and the young are usually born in early May. There are typically four to six young in a litter, although the number may vary from two to 16.

When the young skunks are approximately seven weeks old the female takes them out to search for food, and at about two months they are weaned, or have made the transition from the mother’s milk to other foods.

The morning after a snowstorm is the best time to find your inner sleuth and go tracking in the backyard. Many animals are nocturnal and conduct their business under the protection of dense cover. But thanks...

When Skunks Move In

I have noticed an increase in the skunks that have moved in under my deck. What should I do?