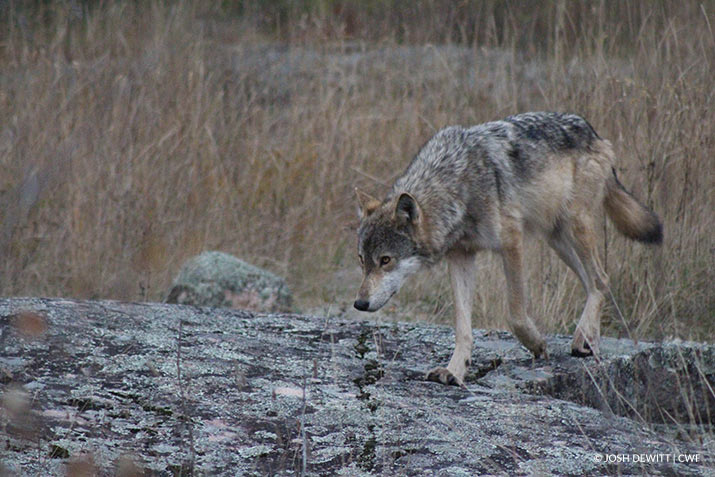 Male wolves can weigh between 20 to 70 kilograms while the female weighs in at 18 to 55 kilograms. In the wild their lifespan can be from 8 to 16 years.

Photo Gallery:
Range: In North America, wolves have been exterminated in the Atlantic provinces, Mexico, the United States (except Minnesota, Alaska, and some of the western states), and the heavily populated areas of southern Canada. They are still common in lightly settled portions of Canada from Labrador to British Columbia and in the Yukon Territory and the Northwest Territories.

Habitat: Wolves are territorial. Each pack occupies an area that it will defend against intruders. Sizes of territories vary greatly and are dependent on the kind and abundance of prey available.

Diet: Wolvesâ chief prey are large mammals such as deer, moose, caribou, elk, bison, and muskox. Wolves also eat a variety of smaller mammals and birds, but these rarely make up more than a small part of their diet.

In the wild, male and female wolves can breed only once a year. Breeding time varies with the latitude but most commonly occurs in March and April. After a nine-week gestation, or pregnancy, period, litters of five or six pups (sometimes eight or more) are born.

Wolf pups are usually born in a den. In coniferous forests and on tundra this den is commonly dug in a type of soil that lends itself to digging, such as in an esker, or gravel ridge caused by glacial meltwater, or similar area.

The pups remain inside whelping dens for approximately two weeks. By mid-autumn they are travelling with the pack and participating in hunting and other pack activities.

Wolves Might Be the Villains in Storybooks, but Theyâre the Heroes of Healthy Ecosystems.