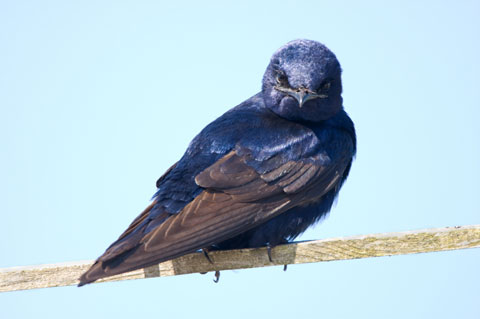 Description:
The Purple Martin, Progne subis, is a conspicuous bird in many populated areas of North America during spring and summer. Averaging 17 to 20 cm in length and a wing span of 9-41 cm, it is Canadaâs largest swallow. The life span of this swallow is one to five years. The Purple Martin resembles other swallows in having a slender body, long wings, and a wide beak. Males show a shiny blue-black coloration on sunny days. Females are lighter in colour, with a pale grey throat and belly.

Range: The Purple Martin breeds throughout much of southern Canada, including Nova Scotia, the southern portions of New Brunswick, Quebec, Ontario, and Manitoba; southern and central Saskatchewan; and north-central Alberta. In British Columbia, martins are found in the Peace River region, southern Vancouver Island, and the extreme southwestern mainland. Martins are much less common in western Canada than in the eastern provinces.

Habitat: It is happy to nest in human-made, multi-compartment houses common both in the country and in the cities, sites that can be revisited by the same bird family for up to 100 years.

Martins arrive in Canada in early spring, usually in early April in Quebec and Ontario and from late April to early May in other areas.  Purple Martins can be found in colonies or in pairs.  In either case the male and female pair will build the nest together, using twigs, leaves, mud, and, if available, feathers.  Martins typically lay one clutch, or set, of four or five dull white eggs per summer.

The female spends 70 to 80 percent of the daylight hours incubating the eggs, which hatch after 15 to 18 days.

Young martins remain in the nest for a long time, typically 28 to 35 days and can be fed up to 60 times per day. This long period is apparently necessary for the full development of the flight feathers.

Condominium living isnât for every bird, but purple martins like it just fine. Our largest swallows, these dark purplish-blue winged acrobats will return to the same multi-unit nesting structure year after year.