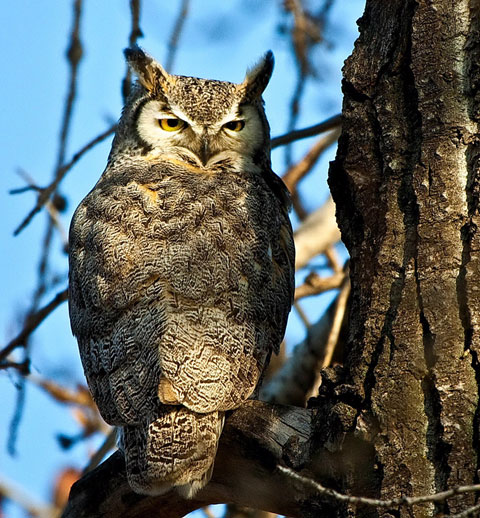 Description:
The Great Horned Owl is one of Canadaâs commonest large birds of prey. The most notable physical attributes are its large size and prominent ear tufts or "horns." A predator that hunts at night, this owl has enormous yellow eyes set in a broad face, a curved beak and claws, and long fluffy feathers. Its coloration tends mainly toward brown or grey-brown, with conspicuous barring. This birdâs legendary hooting sounds like a soft yet vibrant whoo-hoo-ho-o-o.

Habitat: Rarely moves far from its place of birth and can be found in virtually every forested and semi-forested region in North America.

Diet: With no need to make seasonal migrations, the great horned owl is likely to be a year-round resident of limited hunting ranges of about eight to 10 kmÂ².

Great Horned Owls are capable of handling a wide variety of prey, ranging in size from shrews and songbirds to skunks and geese. The Great Horned Owl mainly depends upon medium-size mammals and birds to rabbits and hares where available. When mice or voles are abundant they will consume these as well.

Great Horned Owls customarily take possession of the previous year’s nest of some other raptor, such as a Red-tailed Hawk, or that of a crow or magpie.

The number of eggs per nest ranges from one to five, and the size of the average clutch, or set of eggs, differs from place to place and from year to year.

The young owls are almost fully feathered and capable of short flights around eight weeks of age. However, they remain largely dependent upon their parents for food during most of the summer and likely do not disperse from the territories where they hatched until fall.