Description:
At only 11-14 cm, the common redpoll is a small bird. A member of the finch family, this streaked bird can be difficult to distinguish from pine siskins. Redpolls are named for their red forehead but this is not always obvious, so look instead for the black patch on their chin to recognize them. To identify the sex of common redpolls look for the slight tinge of rose on the breasts of the males.

Range: Common Redpolls can be found year round in the territories (Yukon, Northwest and Nunavut) of Canada. Their breeding area takes them further north in those territories and over to Newfoundland and Labrador. Their winter migration pattern moves them further south across the provinces of Canada and northern United States.

Habitat: Common redpolls are one of the most northern breeding finches, building their nests in the dwarfed willows, spruce, birch, or alders of subarctic forests or the scattered shrubs of northern tundra.

Diet: Redpolls subsist almost entirely on a diet of birch seeds. Then can eat up to 42 percent of their body mass every day. When food is scarce or unsafe to rest and eat they can store up to about 2 grams (0.07 oz.) of seeds in a stretchy part of their esophagus, enough for about a quarter of their daily energy requirement.

Common redpolls are one of the most northern breeding finches, building their nests in the dwarfed willows, spruce, birch, or alders of subarctic forests or the scattered shrubs of northern tundra. The female lays 4 to 6 pale blue-green eggs which she incubates for about 10 days while the male brings her food. The long summer daylight hours of the far north allow extended time for foraging and feeding.

Notes: To survive the extreme cold of their normal wintering areas, the common redpoll has an interesting adaptation for feeding. A sac (diverticula) inside their throats allows them to store seeds temporarily. During times of cold weather, common redpolls will knock seeds to the ground, swoop down to pick them up, quickly storing the seeds in their throat sac, and escape to a more sheltered spot. This gives them the freedom to shell and eat their findings in greater warmth and safety.


All about birds: Common Redpoll 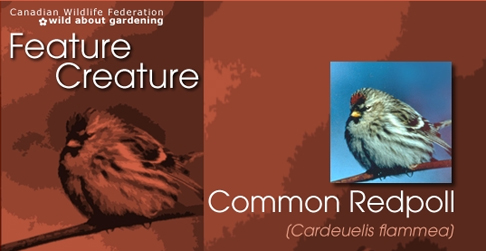