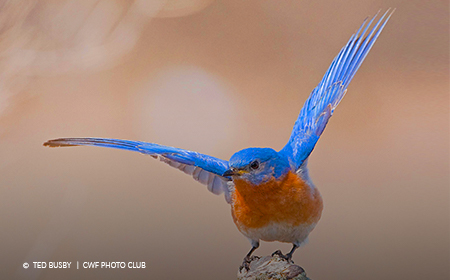 Description:
Canada has three species of bluebirds. They are in the Thrush family, the same family as the American Robin. Bluebirds are a little smaller than our robins, averaging about 7 inches in length and 13-14 inches in width.

All bluebirds have blue heads, wings, backs and tails, which gives them their name. All species also have a black bill, legs and eyes. The differences between species come mainly from the colouring of the throat, breast and belly.

The male Mountain Bluebird is mainly blue with a pale blue breast and white belly.

The male Western Bluebird is a darker blue with orange-red on the upper and side portions of its chest and dull blue-white on the lower middle portion.

The male Eastern Bluebird is similar to the Western Bluebird, but the orange also covers its throat and the front sides of its neck. Another distinction is that its white belly is brighter.

The females and juveniles of these species have similar colouring to the adult males but a much paler version.

Diet: All bluebirds eat a mix of insects, fruit and the seeds of plants considered âweeds.â

Threats and What You Can Do:
With the reduction in suitable nesting sites â namely holes in trees made by primary cavity dwellers â we can help bluebirds by putting up nesting boxes. The boxes must be monitored, however, because non-native and aggressive House Sparrows are known to take over nest boxes. And if your property has snags â dead or dying trees â consider leaving them be if it is safe to do so. This will help cavity nesters in general by providing a place to nest and roost as well as supporting their insect food supply.