Sept. 13, 2017, OTTAWA - The Canadian Wildlife Federation (CWF) is pleased to release a new Hinterland Who’s Who (HWW) series of videos about Pacific Salmon as research on the migration patterns of these amazing fish continues.

“The videos showcase the importance of salmon for West Coast ecosystems, as a keystone species, and highlight its significance to Indigenous peoples,” said Annie Langlois, coordinator of the Hinterland Who’s Who program. “It’s a great addition to our comprehensive collection commemorating the 150th anniversary of Canada’s Confederation.” 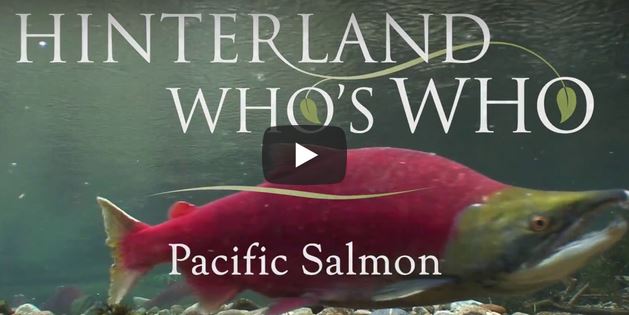 The videos were produced with the support of CWF and Environment and Climate Change Canada. In parallel with the release of these videos about this iconic Pacific fish species, videos on the Atlantic Cod are being simultaneously released. New HWW videos on the Beaver and the Right Whale, and videos on the Wolverine and freshwater turtles in six indigenous languages, were also released in 2017 in honour of Canada 150.

The launch of the new Pacific Salmon videos runs parallel to a Chinook Salmon acoustic telemetry project initiated by CWF and partners in conservation in Whitehorse this summer. Researchers placed receivers at key locations throughout the upper Yukon watershed to track the movement of tagged Chinook Salmon. Historic reports from 1850 indicate that about 10,000 salmon were harvested annually upstream of Whitehorse, however over the past few decades the return has been in the area of 1,200 salmon passing through the dam.

“This research is a first step towards being able to verify the reasons behind the decline,” said Nick Lapointe, CWF Senior conservation biologist, freshwater ecology. “We need to figure out where all the salmon are going and where they are spawning. These salmon complete the longest migration in Canada. After swimming 2,700 km across Alaska and the Yukon, they then climb the longest wooden fish ladder in the world before continuing on to their spawning grounds.”

The research project will assess the efficiency of the fish ladder and the movements of salmon after they pass the ladder on route to their spawning grounds. Tagging began in August and will resume over the next three summers along the Yukon River from Lake Laberge to the Southern Lakes. The project is funded by the Yukon River Panel Grant and conducted by CWF in co-operation with Carleton University, Yukon Energy Corporation, Yukon Fish and Game Association, Whitehorse Ladder and Hatchery Staff, Carcross/Tagish First Nation, Kwanlin Dün First Nation and Ta’an Kwäch’än Council.

CWF thanks all of the funders, partners and community members who are supporting this research project. Data is now being analyzed and tagging will resume next summer.

The chinook is the largest of the Pacific Salmon species.

To watch the HWW videos and access related resources visit HWW.ca. To learn more about the CWF research project in Whitehorse visit CanadianWildlifeFederation.ca.

About the Canadian Wildlife Federation:
The Canadian Wildlife Federation is dedicated to fostering awareness and appreciation of our natural world. By spreading knowledge of human impacts on the environment, sponsoring research, promoting the sustainable use of natural resources, recommending legislative changes and co-operating with like-minded partners, CWF encourages a future in which Canadians can live in harmony with nature. Visit CanadianWildlifeFederation.cafor more information.

About Hinterland Who’s Who:
First created in 1963, HWW made bold use of a relatively new medium -- black and white television -- to reach the Canadian general public. The new Hinterland Who's Who, launched in 2003, serves to rebuild the connection thousands of viewers made with wildlife through the original series and ensure that wildlife remains part of what it means to be Canadian. Hinterlands Who's Who is a joint program of the Canadian Wildlife Federation and Environment Canada. For more information, visit the Hinterland Who's Who Web site at: HWW.ca.