OTTAWA, Sep. 25, 2017 - The Canadian Wildlife Federation (CWF) and Scales Nature Park found hundreds of dead turtles on roads around Muskoka and Ottawa this summer and are calling for more help to save these species at risk.

“We found almost 800 dead turtles,” said David Seburn, CWF researcher. “That is a shocking amount of road kill and our survey results likely underestimate the number of turtles killed on roads as scavengers such as raccoons often remove dead animals before they can be counted.”

Results included 83 Blanding’s Turtles, (22 in Muskoka and 61 around Ottawa). This is a provincially threatened species.

“Threatened species are legally protected but if dozens are killed on roads every year that protection isn’t effective in recovering the species,” Seburn said.

CWF is partnered with Scales Nature Park near Orillia on the Saving Turtles at Risk Today (START) project. The START team conducted road surveys for turtles this spring and summer in the Simcoe-Muskoka area, while CWF surveyed roads around Ottawa.

“This level of mortality is not sustainable for turtle populations,” said Jeff Hathaway, founder of Scales Nature Park. 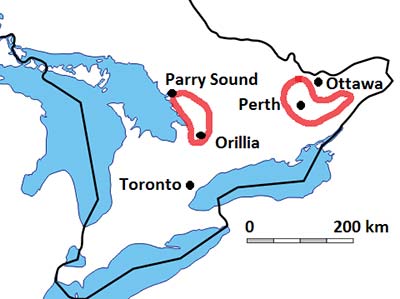 Turtles are one of the most endangered groups of species in Ontario, with seven of eight of Ontario’s species of turtles listed as species at risk.

Community engagement in Muskoka, including a turtle hotline number, may be helping to reduce road mortality but more help is needed.

“The public support has been great,” Hathaway said. “There were more than 350 calls or texts this season to the hotline (1-705-955-4284) about rare, nesting, injured or dead turtles. Most of those calls were about turtles on or beside a road. It was pretty busy at peak times, but we gave a lot of good advice to people when they needed it. We may even need a dispatcher next year, since project staff and volunteers also respond to some calls to assist with the situation and collect data. It’s almost like Turtle 911.”

Road mortality is a major threat to turtles because they can take up to 20 years to reach maturity and be able to breed, and once mature they have low rates of reproduction. Even though females usually lay many eggs, most are eaten by predators so females must lay eggs for many years in a row to replace themselves. In addition, road mortality has a greater impact on adult females looking for places to lay their eggs in June. The annual loss of adult females can result in populations declining over time. Plus, more roads keep on being built and there are more cars on the roads, increasing the risk to turtles and other wildlife.

The primary goal of this summer’s Ottawa-area surveys was to find areas with significant amounts of road kill or hot spots, Seburn said. Once these areas are identified CWF can work with the appropriate agencies (such as municipalities or the Ministry of Transportation of Ontario) to encourage the installation of road mitigation at these sites.

Road mitigation can include road signs warning drivers to watch for turtles, as well as wildlife fencing to keep turtles off roads. Wildlife fencing is usually installed where there are crossing structures (such as culverts) under the road to allow free movement of wildlife under the road.

“Keeping turtles off roads can also help save people,” he said. “Drivers who hit a turtle, or swerve to try and avoid one can cause a serious accident.”

Roads adjacent to wetlands are a threat to turtles and there is an urgent need for road mitigation along many of these roads in Ontario. Fencing and wildlife underpasses would keep turtles off roads and help make drivers safer as well. Until then, everyone can do their part by slowing down on roads near wetlands and watching for turtles, particularly in June during the nesting season.

“We recommend that drivers note where wetlands are located along their regular commuting route and make a habit of slowing down while driving past these wetlands,” Seburn said. “Slow and steady could save threatened turtles.”

Videos about freshwater turtles are also available through CWF and the Hinterland Who’s Who (HWW) series at HWW.ca.