Keeping cats indoors is for the birdsâ¦and the cats 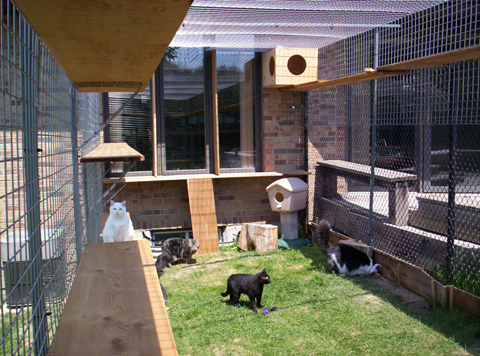 Most gardeners are accustomed not only to wild visitors, but also to a more common domestic drop-in—gardens provide tempting spots for outdoor pet cats to dig or defecate. Cats cannot be blamed for indulging in natural behaviours, since pet owners are the ones who choose whether or not to allow their cats roam outdoors. Unfortunately, many well-meaning caregivers do not realize the grave, wide-ranging impacts of keeping the door open. There are 7.9 million cats in Canada, and fewer than 30 per cent are kept exclusively indoors. This is bad news for cats, who regularly become sick or die prematurely as a result of roaming outdoors, and also for wild animals. In the U.S. alone, scientists estimate that hundreds of millions of birds and more than a billion small mammals are killed by outdoor cats every year.

Outdoor cats face many dangers: attacks by other animals, cars, human cruelty and exposure to poisonous chemicals and debilitating diseases. Outdoor cats can also get lost or picked up by other people, and free-roaming cats may end up displaced or in local animal shelters, where only four per cent are reclaimed by their owners. As a result of these dangers, the average life span of outdoor cats is considerably shorter than that of indoor cats—the Humane Society of the United States estimates outdoor cats live less than five years on average. Healthy indoor cats can easily live 15 to 17 years—over 10 years more than their outdoor counterparts! Because of health risks, two out of three veterinarians recommend keeping pet cats indoors.

In addition, outdoor cats have a devastating effect on wildlife populations. Even well-fed cats kill animals, many that their owners are never aware of. Multiple studies have found feathers and bones in the feces of cats whose owners have reported their cats have not brought home any animals. Even animals who escape from cat attacks aren’t so lucky—bacteria from even a minor cat bite can result in an infection so serious that it can kill an animal, even after it has gotten away. Even with expert care from qualified wildlife rehabilitators, animals attacked by cats have a very poor survival rate.

While it may be instinctual for cats to hunt, they are domestic, non-native predators, meaning that wild species have not developed defences against cat predation, and there is no “natural” role for domestic cats in the wild. When cats prey on wild birds and small mammals, it affects prey species but also takes food away from wild predators who depend on those smaller animals for food. Even if every outdoor cat killed only a few animals a year (though research has shown many cats kill 70 to 100 animals annually), the impact would still be devastating because of the sheer number of cats. With more than 100 million outdoor cats in North America, the threat to wildlife is simply immense.

Keep your pet cats safe indoors, or build or buy a protected outdoor enclosure (Habitat Haven is a Canadian manufacturer of custom-built cat enclosures) to allow your pets some outdoor time without putting them—or wildlife—in harm’s way. Most outdoor cats can transition fairly easily to indoor life, as long as you take care to give them lots of attention and things to do, especially during the adjustment period. Cats require stimulation, and one of the most frequent problems when adjusting to indoor life is boredom. Provide your cat with interactive, interesting toys, spend time playing with your cat every day, and make sure it has posts or other textured areas to scratch on and a clean litter pan. It is also beneficial, when you have the option, to start the transition young; cats raised indoors typically show no interest in going outside. Plant some indoor grass (oat or wheat grass is fine) for pet cats to enjoy—most cats love to munch grass, and it helps their digestion! Many cats also enjoy freshly grown catnip.

If a neighbour’s cats are coming into your yard, consider talking to your neighbour or directing him or her to a source of information. Toronto Wildlife Centre has launched a campaign to raise awareness about outdoor cats and wildlife and encourage people to take action to keep animals safe. For more details, check out keepanimalssafe.ca! You’ll find information on keeping cats happy indoors, answers to frequently asked questions, interviews with vets, and downloadable pamphlets.