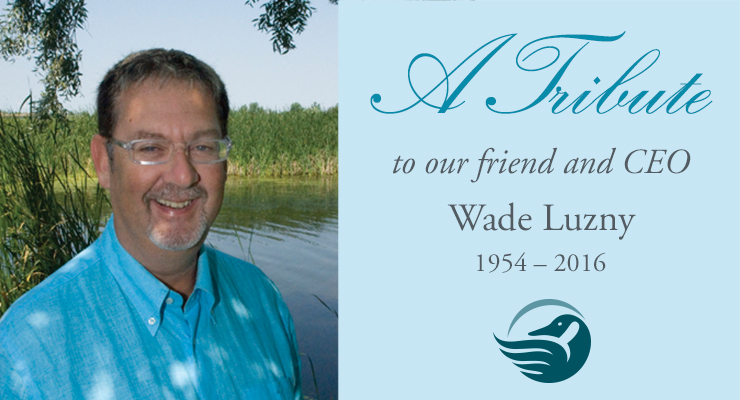 I have traveled the world and I am always humbled by nature’s version of the Pyramids — the Rockies; The Rockies are our Pyramids, the Douglas-fir is our Eiffel Tower, the St Lawrence our autobahn. Our Canadian wilderness continually reminds us of what is

truly great about our nation and yet so fragile if left unattended.
~Wade Luzny, 1954-2016

It is with heavy hearts that we announce the passing of Wade Luzny, CEO and Executive Vice-President of the Canadian Wildlife Federation. Wade left us peacefully on Wednesday, Feb. 17, 2016 at the age of 61 after a courageous battle with cancer.

As CEO and Executive Vice-President of the Canadian Wildlife Federation, Wade forged new ground for the organization and established many successful initiatives and programs. He was committed to new partnerships and educational approaches designed to ensure the advancement of the Canadian Wildlife Federation’s top strategic priorities: connecting Canadians to nature, maintaining healthy wildlife populations and conserving and restoring wildlife habitat. Under Wade’s skillful leadership, CWF has been named one of the top 25 charities out of 86,000 in Canada by the Financial Post for two years in a row.

He dedicated his life to many charitable and educational causes. Prior to leading the Canadian Wildlife Federation, he was General Manager of the Multicultural Council of Saskatchewan since the early 1990s. Wade worked with the Saskatchewan provincial government in the 1980s and also ran a catering business, worked in the hotel and financial industries and trained as a pilot in his youth.

Wade was a visionary, with the kind of leadership that came from the heart. He won the Ernest Thomas Seton Award for the best conservation messaging medium for a film on wetland habitat while he was working for the Saskatchewan Department of Parks and Renewable Resources.

Wade enjoyed travelling and led many Saskatchewan teens and families on tours of Europe. He loved meeting new people, mentoring youth, boating, skiing and spending time with family. He had a zest for life, and believed the richest people were those with a lot of friends.

Wade loved his mountain home in Fernie, British Columbia, but had previously resided in Ottawa, Ontario, Regina, Saskatchewan, as well as Roblin and Dauphin, Manitoba.  He is survived by his wife Karen and seven year old daughter, Olivia. The Memorial Service will be held Tuesday, Feb. 23 at 10:30 AM, Holy Family Catholic Church, 521 4th Ave., Fernie, BC V0B 1M0, Canada.

As the father of a young girl, Wade Luzny placed tremendous value in creating in our youth a sense of awe and wonder in nature. His dedication and commitment to encouraging young people to head outdoors to enjoy our natural world were unparalleled and will help shape the next generation of wildlife stewards.

In tribute to Wade’s contribution to youth engagement, donations in his memory will support programs to encourage young people to experience nature.