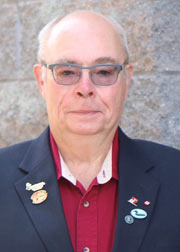 Raised on the south shore of Lake Simcoe, Rob’s family are all avid anglers and hunters. He has held a number of executive positions for the Ontario Federation of Anglers and Hunters since joining in 1982, including as President. He has also served as a member of the York Region Forest Advisory Team for over 30 years, a founding member of the York Environmental Stewardship Committee, co-chair of the Lake Simcoe Community Fisheries Committee, Director at Large for CWF, and a Board Member for the Ontario Wildlife Federation, among other appointments.