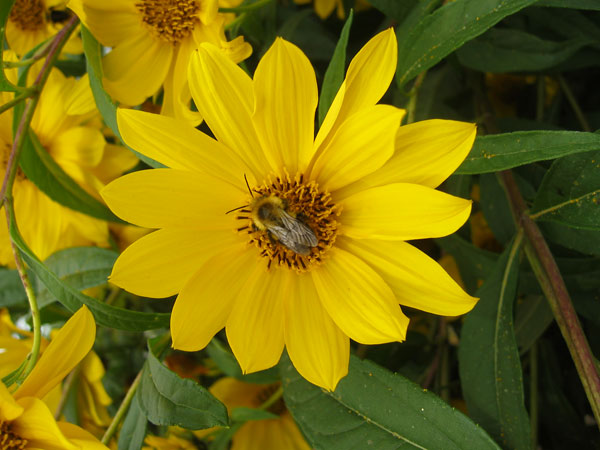 Blooming anywhere from late summer to late fall, aster flowers range from 1 to 5 cm wide with many long thin petals. They have composite flower heads. This means that each flower is actually a group of smaller flowers consisting of ray flowers (petals) surrounding disk flowers (the centre). Disk flowers are usually yellow or burgundy, which make a nice contrast with the blue, purple, violet, or white ray flowers. An added attraction is their sometimes striking purple stems.

Bearberry leaves are dark green and thick with smooth margins arranged alternatively on the stem; they remain on the bush year-round. Small clusters of white-pink flowers hang down from the tips of branches. This low-growing shrub slowly spreads to form mats, making it a useful groundcover for areas that are not suitable for a lawn or flower garden.

The bloodroot flower resembles a water lily and has 8â16 white petals around a golden yellow centre. There are two sepals that fall as the flower opens. The plantâs large, round leaves have several deep lobes. Bloodroot gets its name from its underground stems, also called rhizomes, that contain a red juice. This also inspired its Latin name, Sanguinaria, which means bloody or blood red.

Blue flag grows from 60 to 90 centimetres tall at maturity. Several showy, purple-blue blooms appear from the end of May to early July. The flowers can be up to 10 cm across and have three showy sepals that gracefully curve down (or flop over, depending on your point of view). They have a splash of white and yellow near the centre and purple veins that probably guide pollinating insects to the food within. There are three paler petals nearer the centre, which are stiffly upright. Several large seeds are formed inside a large brown capsule. Blue flag leaves are long and lance-shaped, like prehistoric grass, sometimes up to 3 cm wide and 80 cm tall.

The bog willow enjoys a rich, wet bog like environment and the stem can grow from 50 to 150 centimetres tall. The leaves alternate, smooth, ovate to elliptic, two to five centimetres long, up to two cm wide, with green on top and bluish-green underneath. It carries green to brown catkins from May to June. This shrub has all male or all female catkins. This willow also has oval or pear-shaped capsules that contain woolly seeds in its two halves.

There are two main groups, or genus, of cacti that grow in Canada. Coryphantha (also known as Escobaria) has one native species. It is round with one or a few showy flowers growing on its top. Opuntia, the other group of cacti in Canada, has three native species all of which have flattened oval pads that branch off from one another, and flowers growing at their tips.

Columbine leaves are typically divided into three-lobed leaflets which give them a delicate look. Anywhere from mid-June to early August, their flower stems reach up above the foliage with blooms that are either nodding or upright. Jonesâ columbine is atypical with its compact leaves and short flower stems.

Whereas the eastern white cedar can grow to 15 to 20 metres tall, its western relation, the western red cedar, can reach a whopping 60 metres. Both can live several hundred years. If the tree has been growing at high altitudes and on cliffs and in cracks where root growth is limited, however, it appears stunted, like small shrubs. They both have green scaly leaves, and their mature bark is brown and stringy-looking. Their seed cones are both small â about one centimetre - but the western species has outward turning points at the end of the scales, whereas the eastern speciesâ scales are rounded at the tips.

Winterberry typically grows to three or four metres tall. Its leaves are widest above the middle with a pointed tip with fine teeth along the edges. Flowers are small and white and either male or female, with only one flower type per plant. Winterberry fruit is bright red-orange and stay on the tree long after the leaves have fallen. They tend to be plump for the beginning of winter but shrivel up by the end of the season.

The Christmas fern reaches 10 to 60 cm long with fronds (leaves) that have approximately 20 to 40 pairs of pinnae (leaflets). The pinnae are pointy at the tip, while the base has an upward pointing lobe that resembles a thumb in a very long mitten or toes in a sock. The upper pinnae of several fronds are fertile and much smaller, bearing the sori (spore clusters, similar to seeds) on their undersides.