Elizabeth May One of the Natural Winners 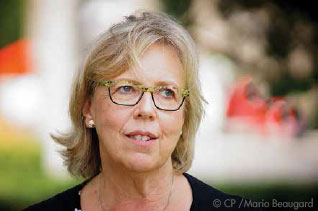 OTTAWA, June 23, 2016 –The Canadian Wildlife Federation (CWF) is pleased to announce the recipients of several prestigious conservation awards.  Green Party leader Elizabeth May is among those being honoured on Saturday, June 25 in Ottawa.

“The Canadian Conservation Achievement Awards showcase the dedicated efforts of political leaders, students, teachers and community organizations to preserving wildlife and habitat,” says Rick Bates, Acting CEO of CWF. “We are very grateful for the leadership, mentorship and accomplishments of these environmental heroes.”

ELIZABETH MAY:  Past President’s Canadian Legislator Award
Most Canadians know Elizabeth May as the leader of the federal Green Party and the member of Parliament for the riding of Saanich-Gulf Islands. But her dedication to environmental issues dates back to the 1970s.  At that time, she played a leadership role in a campaign to block the aerial spraying of insecticides to combat a budworm infestation in Nova Scotia’s forests. She is the author of seven books including How to Save the World in Your Spare Time. The Canadian Wildlife Federation is honoured to recognize Elizabeth May for her outstanding contributions to conservation.

FORUM JEUNESSE DE L’ABITIBI-TEMISCAMINGUE:  Youth Mentor Award
Many of the lakes and rivers in southwestern Quebec are suffering from declining fish populations, blue-green algae blooms and shoreline erosion leading to the deterioration of aquatic habitats. Forum Jeunesse de l’Abitibi-Témiscamingue engages local youth in the conservation of these aquatic ecosystems. Programs have included adopt-a-river, an amphibian and reptile inventory and the installation of nesting boxes for tree swallows and wood ducks. More than 4,000 youth have participated in the program over the past three years. A further 10,000 people have been reached by the conservation education messaging. The Canadian Wildlife Federation is pleased to recognize Forum Jeunesse de l’Abitibi-Témiscamingue  with its Youth Mentor Award.

SYLVIE ROUSSEL-JANSSENS:  Robert Bateman Award
The messages Sylvie Roussel-Janssens conveys through her sculptures raise serious issues about our relationship with nature. “Turf Wars” depicts seven species at risk in B.C.  “How Deep Is Your Lake” is inspired by aquatic ecosystems. Other pieces explore the degradation of the Columbia Icefield, climate change in Canada’s Far North and other environmental issues. Born and raised in Montreal and now based in Chilliwack, BC, Roussel-Janssens continues to produce thought-provoking art which encourages a conservation ethic. CWF is honoured to recognize Sylvie Roussel-Janssens with the Robert Bateman Award for artistic achievements in conservation.

NEIL FLETCHER:  Stan Hodgkiss Canadian Outdoorsperson of the Year
In 2010, the BC Wildlife Federation appointed Neil Fletcher as its Wetland Education Program co-ordinator.  As part of this role, he was to facilitate three programs: Map Our Marshlands, Wetlandkeepers and the Wetlands Institute. But in addition to facilitating these activities, Fletcher created multi-stakeholder working groups, developed restoration design workshops, and helped organize Bioblitz wildlife surveys.  He also created Bogblog, a website where people can share stories and photographs about wetland conservation. Fletcher enjoys many outdoor activities with his family, such as hiking, snowshoeing and paddling a homemade canoe. He is being awarded CWF’s Stan Hodgkiss Outdoor Person of the Year Award.

LAKE ONTARIO ATLANTIC SALMON RESTORATION PROGRAM:  Doug Clark Memorial Award
The Ontario Federation of Anglers and Hunters, Ontario’s Ministry of Natural Resources and other partners and sponsors have been working together to restore Atlantic Salmon populations to Lake Ontario. One of the program’s most recent accomplishments is the creation of a bypass channel around a pond to improve the migration path for adult salmon on spawning runs. The project focused on an area along Mitchell Creek in Pickering. A field next to the channel was converted into a wetland to maintain water flows to the creek. More work followed to develop the local ecosystem, supported by community and student volunteer work. About 2,500 trees have also been planted along the stream bank.

D.C. REID:  Roderick Haig-Brown Award
D.C. Reid is one of Canada’s leading writers on sport fishing and fisheries policy. He has published articles in more than 50 newspapers, magazines and websites and is the author of 12 books, including novels, non-fiction and collections of poetry inspired by his outdoor experiences. Among them are titles such as Fishing for Dreams, a memoir of his angling experiences on the west coast of B.C., and Vancouver Island Fishing Guide, the go-to reference for sport fishers. Reid, who was born in Calgary and now lives in Victoria, has written extensively on ending the environmentally damaging practice of open-water fish farming.  For his leadership and dedication, D.C. Reid is being presented CWF’s Roderick Haig-Brown Award for the conservation and wise use of recreational fisheries in Canada.

LORNE G. MANN:  Roland Michener Conservation Award
Wildlife have returned to the junction of the Peace and Smokey rivers near Peace River, AB thanks to the dedication of Lorne G. Mann. The site had been used as a paintball field and was littered with dilapidated buildings, open trenches and assorted debris before Mann restored the space. He stabilized slough and slide areas, cleared thistle patches by hand and filled in paintball trenches. Then he planted trees, groomed walking trails, installed benches and posted signs banning motorized vehicles. Mann continues to improve the area, connecting trails to create loops and protecting native vegetation. As a result, elk, deer, boreal birds, native flora have returned, along with many members of the public now able to enjoy the site in its natural beauty.

BONNIE ANDERSON: WILD Educator of the Year
For more than 20 years Bonnie Anderson has been training educators to deliver conservation programs for youth.  She spent 18 years with the Kawartha Pine Ridge District School Board in Ontario and four years working with an outdoor education and leadership centre in Ontario. In 2012, she was the feature program writer for climate and polar issues at the Children’s Museum of Italy. In 2013 and 2014, she travelled to the Arctic to participate in CWF’s Summer Institute. She translated those experiences into workshops she now gives to students and teachers, focused on northern issues such as aboriginal culture and food security.
CWF thanks all the award recipients as well as the nominees and nominators. Photos and profiles of the 2016 winners are featured in the July-August issue of Canadian Wildlife magazine.