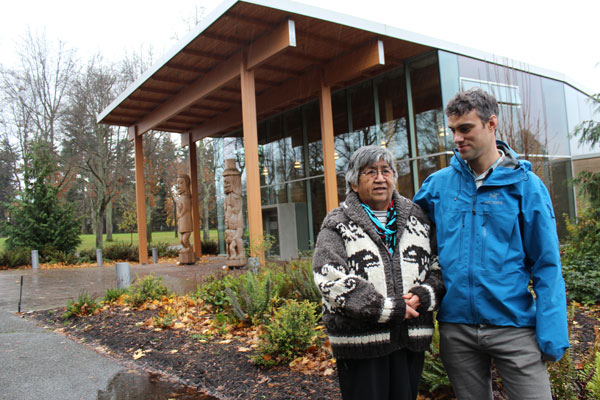 Memories of talking with other youngsters at a North Pacific Cannery dock on the Skeena Slough in northwestern BC have stayed with Iona Campagnolo. It was a formative experience that played a recurring role throughout her life as a prominent broadcast journalist, politician and tireless advocate for First Nations rights, and demonstrates how powerful “sense of place” can be.

University of Victoria doctoral candidate Nick Stanger is researching that “sense of place” and how formative places become transformative places, such as that cannery dock for Campagnolo—with help from the Canadian Wildlife Federation in gathering data.

Stanger says with more and more time spent online and in front of screens, people are losing their connection to the ecological systems that are life-sustaining, both in the physical and psychological senses. His research, which is supported by a Social Sciences and Humanities Research Council (SSHRC) Doctoral Fellowship, is an interactive investigation of how learning that occurs within childhood places has lasting effects on our lives.

Stanger enlisted the help of four prominent British Columbians—Campagnolo, Tsartlip First Nation elder and UVic Elder-in-Residence May Sam, National Geographic Explorer-in-Residence Wade Davis, and social activist Claudia Li—who were filmed explaining their own transformative places. The stories are at www.transformativeplaces.com, where the project is now open to public submissions, 10 of which will become data for Stanger’s dissertation.

“I was raised outside of Montreal and that experience had a big impact on me. I think it was how I became an anthropologist, because it was the two solitudes of the 1950s where the French didn’t speak to the English and vice versa,” says Davis. “There was a boulevard that ran down the neighbourhood dividing our worlds. I would look across this boulevard to another world—a different religion, a different language, a different way of being, a different way of carrying yourself, a different sense of family. I became really intrigued and crossing those barriers between cultures is all I have ever done all my life as a result.”

Stanger—chair of the Child and Nature Alliance of Canada, which aims to connect organizations, families, and youth with nature-based experiences—is getting assistance from several high-profile organizations, including the Canadian Wildlife Federation, which is sharing a link to the project on its website, Facebook and Twitter pages.