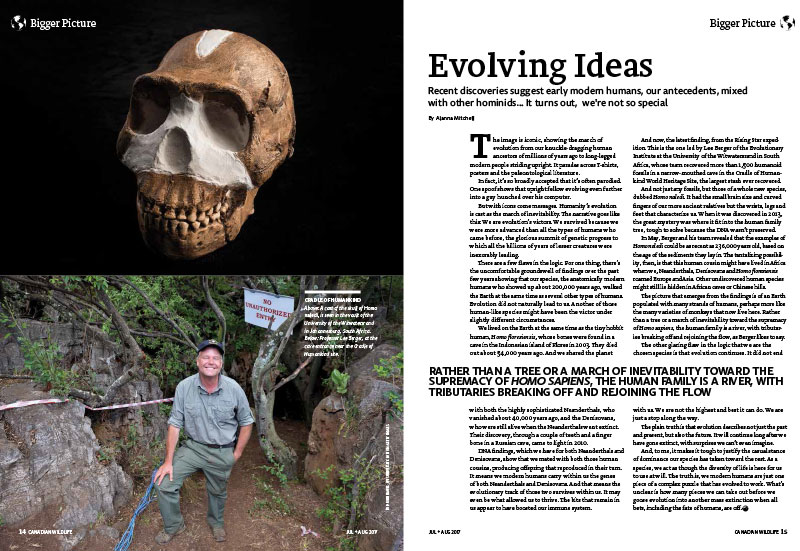 Recent discoveries suggest early modern humans, our antecedents, mixed with other hominids... It turns out, we're not so special

he image is iconic, showing the march of evolution from our knuckle-dragging human ancestors of millions of years ago to long-legged modern people striding upright. It parades across T-shirts, posters and the paleontological literature. In fact, it’s so broadly accepted that it’s often parodied. One spoof shows that upright fellow evolving even further into a guy hunched over his computer.

But with icons come messages. Humanity’s evolution is cast as the march of inevitability. The narrative goes like this: We are evolution’s victors. We survived because we were more advanced than all the types of humans who came before, the glorious summit of genetic progress to which all the billions of years of lesser creatures were inexorably leading.

There are a few flaws in the logic. For one thing, there’s the uncomfortable groundswell of findings over the past few years showing that our species, the anatomically modern humans who showed up about 200,000 years ago, walked the Earth at the same time as several other types of humans. Evolution did not naturally lead to us. Another of those human-like species might have been the victor under slightly different circumstances.

We lived on the Earth at the same time as the tiny hobbit human, Homo floresiensis, whose bones were found in a cave in the Indonesian island of Flores in 2003. They died out about 54,000 years ago. And we shared the planet with both the highly sophisticated Neanderthals, who vanished about 40,000 years ago, and the Denisovans, who were still alive when the Neanderthals went extinct. Their discovery, through a couple of teeth and a finger bone in a Russian cave, came to light in 2010.

DNA findings, which we have for both Neanderthals and Denisovans, show that we mated with both those human cousins, producing offspring that reproduced in their turn. It means we modern humans carry within us the genes of both Neanderthals and Denisovans. And that means the evolutionary track of those two survives within us. It may even be what allowed us to thrive. The bits that remain in us appear to have boosted our immune system.

RATHER THAN A TREE OR A MARCH OF INEVITABILITY TOWARD THE SUPREMACY OF HOMO SAPIENS, THE HUMAN FAMILY IS A RIVER, WITH TRIBUTARIES BREAKING OFF AND REJOINING THE FLOW

And now, the latest finding, from the Rising Star expedition. This is the one led by Lee Berger of the Evolutionary Institute at the University of the Witwatersrand in South Africa, whose team recovered more than 1,500 humanoid fossils in a narrow-mouthed cave in the Cradle of Humankind World Heritage Site, the largest stash ever recovered. And not just any fossils, but those of a whole new species, dubbed Homo naledi. It had the small brain size and curved fingers of our more ancient relatives but the wrists, legs and feet that characterize us. When it was discovered in 2013, the great mystery was where it fit into the human family tree, tough to solve because the DNA wasn’t preserved.

In May, Berger and his team revealed that the examples of Homo naledi could be as recent as 236,000 years old, based on the age of the sediments they lay in. The tantalizing possibility, then, is that this human cousin might have lived in Africa when we, Neanderthals, Denisovans and Homo floresiensis roamed Europe and Asia. Other undiscovered human species might still lie hidden in African caves or Chinese hills.

The picture that emerges from the findings is of an Earth populated with many strands of humans, perhaps more like the many varieties of monkeys that now live here. Rather than a tree or a march of inevitability toward the supremacy of Homo sapiens, the human family is a river, with tributaries breaking off and rejoining the flow, as Berger likes to say. The other glaring flaw in the logic that we are the chosen species is that evolution continues. It did not end with us. We are not the highest and best it can do. We are just a stop along the way.

The plain truth is that evolution describes not just the past and present, but also the future. It will continue long after we have gone extinct, with surprises we can’t even imagine. And, to me, it makes it tough to justify the casual stance of dominance our species has taken toward the rest. As a species, we act as though the diversity of life is here for us to use at will. The truth is, we modern humans are just one piece of a complex puzzle that has evolved to work. What’s unclear is how many pieces we can take out before we goose evolution into another mass extinction when all bets, including the fate of humans, are off.

You may know them as âwater bearsâ or âmoss piglets.â But donât be fooled by the cute names. Tiny tardigrades stand up to almost any torture you can devise.

The real evolution of life on Earth began with changes to the chemical composition of the atmosphere. For the sake of the planetâs biology, letâs remember that.