The Wild Side of the Cosmos 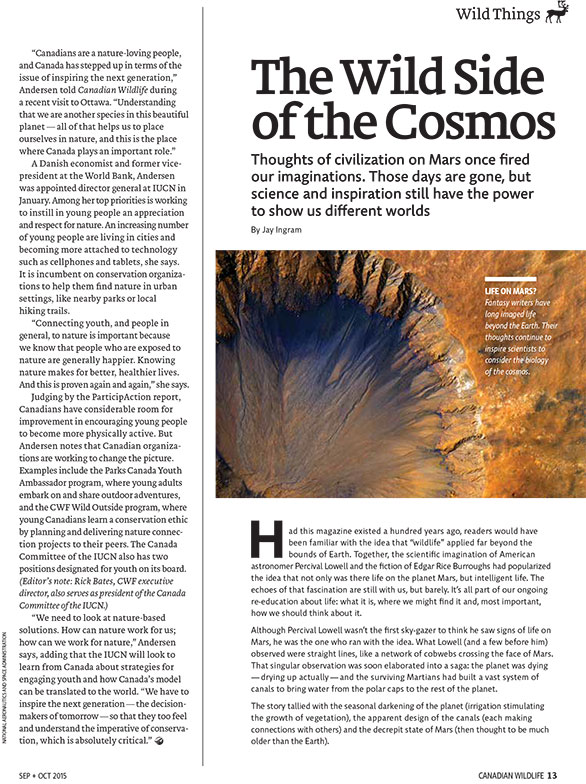 Thoughts of civilization on Mars once fired our imaginations. Those days are gone, but science and inspiration still have the power to show us different worlds

Had this magazine existed a hundred years ago, readers would have been familiar with the idea that “wildlife” applied far beyond the bounds of Earth. Together, the scientific imagination of American astronomer Percival Lowell and the fiction of Edgar Rice Burroughs had popularized the idea that not only was there life on the planet Mars, but intelligent life. The echoes of that fascination are still with us, but barely. It’s all part of our ongoing re-education about life: what it is, where we might find it and, most important, how we should think about it.

Although Percival Lowell wasn’t the first sky-gazer to think he saw signs of life on Mars, he was the one who ran with the idea. What Lowell (and a few before him) observed were straight lines, like a network of cobwebs crossing the face of Mars. That singular observation was soon elaborated into a saga: the planet was dying — drying up actually — and the surviving Martians had built a vast system of canals to bring water from the polar caps to the rest of the planet.

The story tallied with the seasonal darkening of the planet (irrigation stimulating the growth of vegetation), the apparent design of the canals (each making connections with others) and the decrepit state of Mars (then thought to be much older than the Earth).

It was true that Percival, viewing Mars from his purpose-built telescope in Flagstaff, Ariz., saw canals much more often than did astronomers in other locations. Indeed, many astronomers never saw them at all. But it’s important to remember that even in the lens of an excellent telescope of the day, Mars never looked bigger than the full moon with the naked eye; some have described it as looking like a coin at the bottom of a swimming pool. Whether Lowell saw canals because he wanted to, or saw them because the human eye and brain conspire to see structure where it doesn’t exist, has never been properly explained.

On the fantasy side, Edgar Rice Burroughs capitalized on the public fascination with the red planet in his 11-book series about the American adventurer John Carter on Mars, or as the Martians themselves called it, “Barsoom.” Lowell died in 1916, and his departure, together with the elusiveness of the putative canals, combined to quieten interest in Martian civilizations. The final nail in the coffin of canals was the flybys of the American Mariner spacecraft in the mid-1960s, which revealed the geologically fascinating but apparently barren planet.

But while the idea of intelligent life on Mars has been quietly set aside, Lowell would be pleased to know that the search for life of another kind on his planet is moving full speed ahead. Mars rovers and orbiters have gradually pieced together a compelling case for the existence of liquid water on the planet. There might just be enough, together with organic material and energy from the sun, to allow the existence of microscopic life, in particular bacteria.

We wouldn’t have been nearly as open to this idea 25 years ago, but we now know that bacteria live in the most absurdly extreme environments on Earth: in Antarctic lakes under kilometres of ice, in rocks, at the bottom of mineshafts, in boiling water. And of course our bodies, especially our guts, are teeming with them. It’s hard to find a place on Earth where they don’t live, and there are likely thousands of species we are not yet familiar with. These revelations have boosted the faith of exobiologists who dream of microbes on Mars. And if not Mars, then Europa or Ganymede. So life, yes; intelligent life, maybe one day, somewhere.

The dynamic here is the delicate balance between science and imagination, the art of dreaming of the possible constrained by physics and chemistry. Canals on Mars were a stretch; bacteria on Mars not so much. But it’s tricky. The Viking spacecraft conducted experiments on Mars, looking for evidence of life. The results were hotly contested, ambiguous, inconclusive.

And here’s where imagination stands up again. Are we ready to entertain ideas about life that might not be exactly what we find on Earth? It seems sensible that life on a nearby planet, given its roughly similar history to ours, should need water, carbon, hydrogen, nitrogen. But is that really all there can be? Carl Sagan, a big fan of Burroughs’ John Carter adventures, called it “carbon chauvinism.”

Let’s face it: if there are no eight-foot, four-armed creatures on Mars, we will be disappointed. But if we find life, even of the microscopic kind, a life form that works its vitalistic magic in some as yet unanticipated way, then that too will be sensational. I suspect the eight-footers might be out there still. Just much, much farther away.