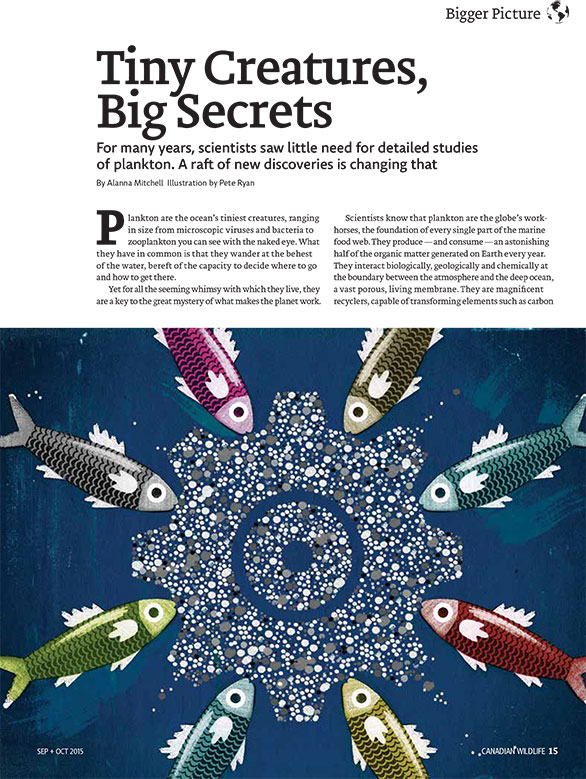 For many years, scientists saw little need for detailed studies of plankton. A raft of new discoveries is changing that.

Plankton are the ocean’s tiniest creatures, ranging in size from microscopic viruses and bacteria to zooplankton you can see with the naked eye. What they have in common is that they wander at the behest of the water, bereft of the capacity to decide where to go and how to get there.

Yet for all the seeming whimsy with which they live, they are a key to the great mystery of what makes the planet work.

Scientists know that plankton are the globe’s workhorses, the foundation of every single part of the marine food web. They produce — and consume — an astonishing half of the organic matter generated on Earth every year. They interact biologically, geologically and chemically at the boundary between the atmosphere and the deep ocean, a vast porous, living membrane. They are magnificent recyclers, capable of transforming elements such as carbon and nitrogen into substances that living creatures can make use of. The lungs of the planet, they produce every second breath of oxygen.

But scientists know little else about these enigmatic creatures and, truth be told, didn’t think they needed to for many years. That’s changing. Several investigations into the global populations and interconnections of plankton have been going on, and early results were published recently in the journal Science.

These are the first published reports from the Tara expedition, a three-and-a-half year exploration of plankton that took samples in all the far-flung parts of the global ocean, from warm to cold, shallow to deep. It’s difficult science because these creatures are nearly impossible to grow and examine in the lab. You have to be on the ocean to study them. And the Tara team looked not just at what’s there in terms of plankton but also what else they hang out with. In all, the team took 35,000 samples at 210 stations, examining the genetic makeup of individual plankton and then trying to discern the composition of unseen, unimagined planktonic communities.

The project recalls the heroic science expedition of Charles Darwin in HMS Beagle in the 1830s that led to his development of the theory of evolution and the voyage of HMS Challenger in the 1870s that set the path for modern oceanography.

Tara, a 110-foot schooner, has her own storied past. Her previous owner was Peter Blake, the New Zealander who won the America’s Cup in 2000. Blake was killed on board Tara in 2001 by pirates as he was monitoring the ecological health of the Amazon River. Then the boat’s new owner, Etienne Bourgois, son of the French fashion maven agnès b., allowed the schooner to be deliberately trapped in the Arctic ice for 506 days over two winters to track ice movements in the age of climate change. Now, Bourgois’s company is footing half the $10-million tab for the plankton journeys.

So far the findings are fascinating. The main one is just how many previously unknown plankton are out there in the ocean. The Tara scientists, led by Shinichi Sunagawa of the European Molecular Biology Laboratory in Heidelberg, Germany, have set up a gene catalogue featuring 40 million genes, mostly unknown before the expedition. They’ve also found intriguing new ways that the ocean’s tiniest inhabitants interact, identifying extensive networks no one foresaw.

A picture is gradually emerging of how the planktonic world might be constructed. It matters because the characteristics of that world are changing rapidly as our species puts extra carbon into the atmosphere, altering patterns of climate and ocean chemistry. Given that they are so fundamental to the mechanics of the planet and that the water is becoming more acidic, warmer and short of dissolved oxygen, what will the plankton do?

One of the Tara papers suggests that the key to the composition of the planktons’ communities is the temperature of the water. It means that as the water changes temperature, the communities may be broken up, with unknown consequences.

Another paper published recently in Nature Climate Change described the results of laboratory experiments conducted on diatoms, a type of one-celled algae responsible for about a fifth of the ocean’s primary productivity, that is, the energy produced from photosynthesis. At very high levels of acidification, they have trouble photosynthesizing. And, disturbingly, these are plankton whose shells are silica, not the calcium carbonate that scientists already know will be harder to make as the ocean becomes more sour. That means more species of plankton are vulnerable to the impacts of climate change.

There is more to come from the Tara expedition and other new research on plankton. No doubt more discoveries are to come. It’s a fascinating new area of scientific discovery, quintessentially modern in its scope: Find out what’s there and, at the same time, try to figure out how humanity’s actions are affecting it. In the long run, the challenge will be ours. a