Eye of the Beholder? Not Quite 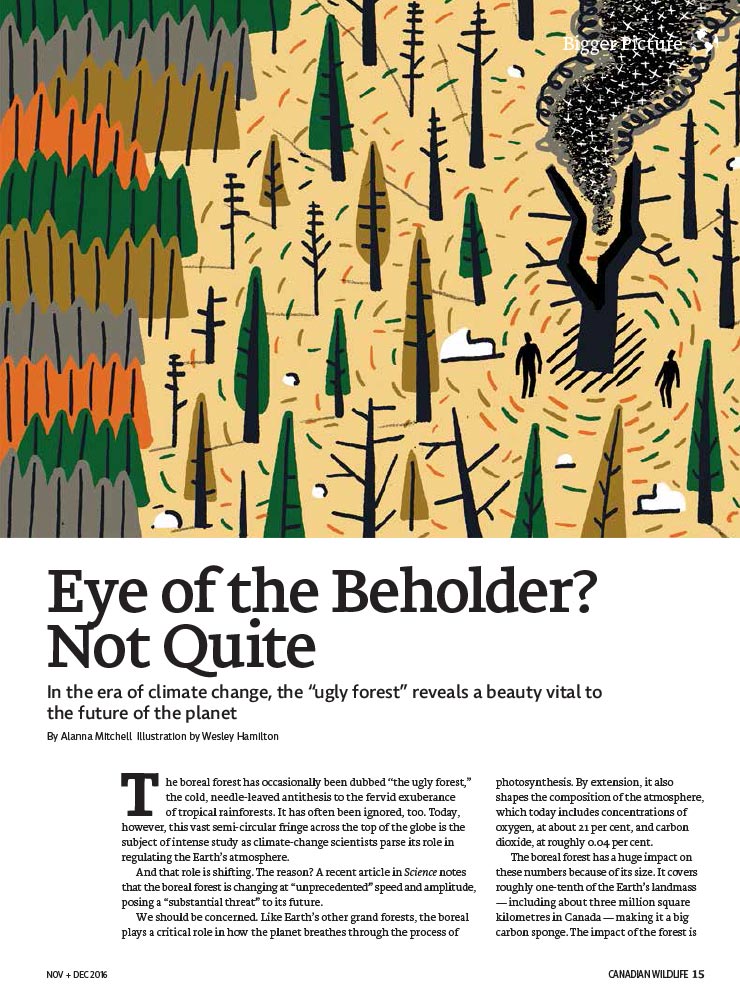 Not Quite In the era of climate change, the “ugly forest” reveals a beauty vital to the future of the planet

The boreal forest has occasionally been dubbed “the ugly forest,” the cold, needle-leaved antithesis to the fervid exuberance of tropical rainforests. It has often been ignored, too. Today, however, this vast semi-circular fringe across the top of the globe is the subject of intense study as climate-change scientists parse its role in regulating the Earth’s atmosphere.

And that role is shifting. The reason? A recent article in Science notes that the boreal forest is changing at “unprecedented” speed and amplitude, posing a “substantial threat” to its future.

We should be concerned. Like Earth’s other grand forests, the boreal plays a critical role in how the planet breathes through the process of photosynthesis. By extension, it also shapes the composition of the atmosphere, which today includes concentrations of oxygen, at about 21 per cent, and carbon dioxide, at roughly 0.04 per cent.

The boreal forest has a huge impact on these numbers because of its size. It covers roughly one-tenth of the Earth’s landmass — including about three million square kilometres in Canada — making it a big carbon sponge. The impact of the forest is so significant that global levels of carbon dioxide, a major greenhouse gas, actually drop slightly in spring and summer when it is growing most. Oxygen levels rise, too.

The boreal is also cold. Thus, when trees die, they decompose slowly, keeping carbon in their bodies relatively longer than dead trees in tropical forests, which rot swiftly and release large amounts of carbon. The cold also keeps the boreal’s permafrost frozen, trapping carbon-rich methane, another important greenhouse gas, underneath the surface of the soil. As well, much of the boreal is dotted with marshy peatland, another efficient storage facility for carbon.

In today’s atmosphere, carbon is the lead actor. It may be small by volume, but it is powerful. In the past 250 years, concentrations have increased about 43 per cent. That’s a massive jump in a short period of time, caused mainly by two human activities: burning fossil fuels, which puts long-buried carbon from ancient fossils into today’s atmosphere, and the development of forests and grasslands for agriculture. With more carbon in the atmosphere, more heat is being trapped around the Earth, causing an overall warming of the planet and altering such things as weather patterns and the water cycle.

The larger point is that the boreal forest traditionally soaks up more carbon than it emits. In other words, its growth outstrips its rot, making it a “carbon sink,” a function it appears to be better at than tropical rainforests. That means the boreal offsets some of the carbon-based gases humans are putting into the atmosphere.

The catch is that as climate changes, the boreal’s ability to sop up carbon is waning. In fact, the boreal in western Canada and Siberia may already be emitting more carbon than it’s taking in, a phenomenon that Werner Kurz, a senior research scientist with the Canadian Forest Service, fears is getting worse.

How? You’d think the boreal would soak up more carbon in a warmer climate because it would grow more. But offsetting any extra growth are other effects that release carbon. The most immediate is the invasion of mountain pine beetle, killing lodgepole and jack pines, which is moving ever eastward into the boreal from British Columbia.

The larger point is that the boreal forest traditionally soaks up more carbon than it emits. Its growth outstrips its rot, making it a better carbon sink than rainforests

Droughts and higher temperatures are also killing trees and setting the stage for more wildfires like the one that began in May, forcing the evacuation of nearly 90,000 people from Fort McMurray, Alta.

By 2100, annual average temperatures across the whole boreal will have risen by between four and 11 degrees Celsius, more than in any other forest system. Some of the boreal may become savannah. As that happens, permafrost will melt and peatlands will dry, releasing yet more carbon into the atmosphere. As Kurz and others point out, all these factors reinforce each other in a vicious cycle.

Already the world’s forest biologists are talking about managing parts of the boreal to store as much carbon as possible. It’s different from managing them to preserve creatures and entails growing the right trees and then using the lumber. That’s already happening in parts of Europe.

It’s a little like using the boreal as a secret weapon in the fight against climate change. But, as all the scientists stress, without actually lowering carbon levels in the atmosphere, even that wouldn’t be enough to keep the “ugly forest” hale and the planet healthy.

Many creatures can only survive in very particular habitats.