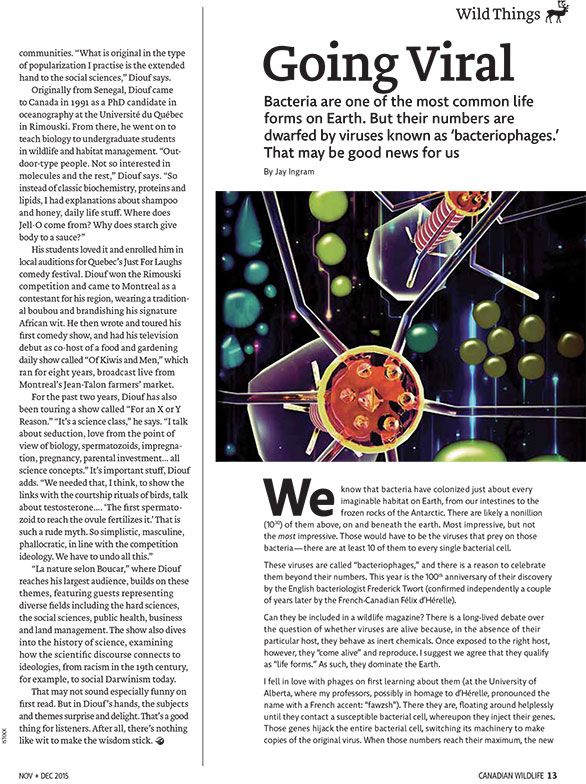 Bacteria are one of the most common life forms on Earth. But their numbers are dwarfed by viruses known as ‘bacteriophages.’ That may be good news for us.

We know that bacteria have colonized just about every imaginable habitat on Earth, from our intestines to the frozen rocks of the Antarctic. There are likely a nonillion (1030) of them above, on and beneath the earth. Most impressive, but not the most impressive. Those would have to be the viruses that prey on those bacteria — there are at least 10 of them to every single bacterial cell.

These viruses are called “bacteriophages,” and there is a reason to celebrate them beyond their numbers. This year is the 100th anniversary of their discovery by the English bacteriologist Frederick Twort (confirmed independently a couple of years later by the French-Canadian Félix d’Hérelle).

Can they be included in a wildlife magazine? There is a long-lived debate over the question of whether viruses are alive because, in the absence of their particular host, they behave as inert chemicals. Once exposed to the right host, however, they “come alive” and reproduce. I suggest we agree that they qualify as “life forms.” As such, they dominate the Earth.

I fell in love with phages on first learning about them (at the University of Alberta, where my professors, possibly in homage to d’Hérelle, pronounced the name with a French accent: “fawzsh”). There they are, floating around helplessly until they contact a susceptible bacterial cell, whereupon they inject their genes. Those genes hijack the entire bacterial cell, switching its machinery to make copies of the original virus. When those numbers reach their maximum, the new viruses, perhaps a few hundred strong, break out of the doomed bacterium and begin the process anew.

While impressive, the efficiency of the infectious process is nothing compared to fine detail. Some of the most common phages prey on the well-known inhabitant of our gut, E. coli. Many of these phages have spindly, lunar lander-like legs, which they only deploy when safely on the surface of the bacterium. Then they “walk” across the surface, searching for the exact surface structure, a receptor, to which they can attach to, and then infect, the bacterium.

There is no intent or deliberation going on here — this is simply a set of events dictated by arrangements of molecules that bond to each other, or don’t. So, for instance, bacteria like E. coli can mutate, change their receptors and be resistant to phages — for a while. But inevitably mutant phages arise in response, and the two antagonists are back at square one.

This all plays out on the unfamiliar ultramicroscopic scale. Nonetheless, it has all the features — seeking, stalking and attacking — of more familiar predator-prey combat. For instance, bacteria swim using long thin appendages called flagella. They’re not whips; they don’t flex. They are rigid corkscrews that spin; when the direction of spin reverses, the cell reverses its field. In some species, that forward/reverse switch happens every five seconds. And there are phages that take advantage of that.

One phage in particular has not only a “tail” (the legs I referred to earlier that make contact with the bacterial cell) but also a unique filament extending out from what can only be called its “head” (which contains the packaged genetic material). With this filament, which is highly flexible, the virus actually lassos the bacterial flagellum as it swims by. If the virus’s timing has been right, the bacterium will be in the five-second phase of being pulled through the water by its flagellum, and the filament, bound to the flagellum, spins its way down to the surface of its victim.

I mentioned there are an estimated nonillion bacteria on earth; there are likely 10 nonillion phages. On the basis of this alone they deserve our respect, if not admiration. A trillion phages pass through the sewage system of a city of 60,000 every day.

With so many phages possessing the ability to overcome any new defence thrown up by its victims, you’d think we would be using them every day in partnership with antibiotics. After all, that’s what phages do: kill bacteria. This is not a new thought: Felix d’Hérelle himself speculated that phages could treat infections. Sinclair Lewis raised the same possibility in his 1925 Pulitzer Prize-winning novel, Arrowsmith.

But the development of antibiotics shortly afterward derailed any impetus for using phages as medicine. Until now, that is, as the rise of antibiotic-resistant strains of bacteria poses a serious threat. Only Russia, Poland and Georgia make widespread use of phages today (a throwback to days of antibiotic shortages), but there is growing international interest in them. We might one day make use of their awesomely devious bactericidal techniques.