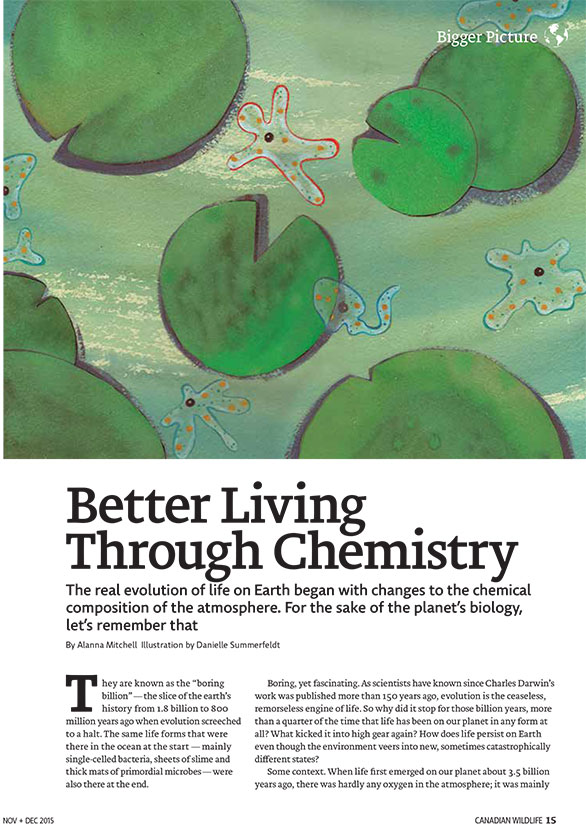 The real evolution of life on Earth began with changes to the chemical composition of the atmosphere. For the sake of the planet’s biology, let’s remember that.

They are known as the “boring billion” — the slice of the earth’s history from 1.8 billion to 800 million years ago when evolution screeched to a halt. The same life forms that were there in the ocean at the start — mainly single-celled bacteria, sheets of slime and thick mats of primordial microbes — were also there at the end.

Boring, yet fascinating. As scientists have known since Charles Darwin’s work was published more than 150 years ago, evolution is the ceaseless, remorseless engine of life. So why did it stop for those billion years, more than a quarter of the time that life has been on our planet in any form at all? What kicked it into high gear again? How does life persist on Earth even though the environment veers into new, sometimes catastrophically different states?

Some context. When life first emerged on our planet about 3.5 billion years ago, there was hardly any oxygen in the atmosphere; it was mainly carbon dioxide spewed from hyperactive volcanoes. But not too long before the boring billion began, all that changed. About 2.3 billion years ago, a huge pulse of oxygen entered the atmosphere. Known as the “great oxygenation event,” it shows up in rusty-red soils dated to about that time, evidence that new oxygen in the atmosphere was reacting with iron-based minerals.

All that oxygen came from cyanobacteria, a type of marine plankton. Those tiny one-celled marine creatures, bereft even of a nucleus, figured out all those eons ago how to turn the energy of the sun into food by photosynthesizing. The waste product of photosynthesis is oxygen. Cyanobacteria did the chemical conversion in such vast numbers, producing so much oxygen, that it began to accumulate in the atmosphere.

So the scientific puzzle has been: why did evolution not ramp up immediately when the oxygen showed up, propelling life to dizzying new heights of diversity and complexity? Now several new studies, including one published in Science in October 2014, suggest that the concentration of oxygen in the atmosphere was unstable. For decades, scientists had thought that once oxygen reached a high proportion in the atmosphere, it had remained high. Now, they’ve found evidence that it peaked and then fell. Moreover, it didn’t reach into the deep ocean.

Instead, the oxygen in the atmosphere allowed iron-rich minerals to rust, producing sulfate. In turn, that sulfate ran into the ocean, where bacteria turned it into hydrogen sulfide, a poisonous, corrosive, explosive gas that smells like rotting eggs. So the ocean below the surface had little oxygen and lots of poisonous gas.

While the ocean likely contained some complex forms of life — still small, but having a nucleus — these creatures were deeply unhappy with all the hydrogen sulfide. They barely held on, not thriving and not evolving. The ocean’s sulfide-loving bacteria, however, were ecstatic. They bopped along, maintaining huge numbers. But they were not careerist like the cells with nuclei — known as eukaryotes — and they never evolved into more complicated creatures.

Then, a billion years on, about 800 million years ago, the planet’s tectonic plates began to shift. Continents collided. Scientists suspect that hydrothermal vents along the cracks in the earth’s crust started emitting iron, which the eukaryotes love. The ocean lost its high concentration of hydrogen sulfide; eukaryotes began to diversify.

At the same time, another great pulse of oxygen hit the atmosphere from all those photo-synthesizers. This time, it stayed in robust concentrations.

And that’s when a ferocious spate of evolutionary ingenuity began as the eukaryotes began figuring out how to make all sorts of multi-cellular beings. It led first to an episode of “snowball Earth,” when the planet’s surface was covered with ice as carbon dioxide levels in the atmosphere sank to extremely low levels, and then to the fabled Cambrian explosion of life about 542 million years ago.

Creatures developed heads, tails, arms and legs. In fact, the ancestors of most of the animals living today — including us — and many long extinct, emerged during this period of evolutionary extravagance. The best record is the Burgess Shale, near Field, British Columbia. Among the oddities found there are the insect-like Opabinia with five eyes and a stretchy snout that passed food to its mouth, and the Hallucigenia worm with its clawed legs and fearsome spikes.

The lesson? The planet’s chemistry shapes its biology. But don’t forget that biology also shapes chemistry. It’s a twoway street. That’s worth remembering in this era of extreme human alteration of the chemistry of the planet’s life-support systems. If nothing else, it’s intriguing to wonder whether what we’re doing today will help spawn the creatures of the next billion years.