The Secret Life of Feathers 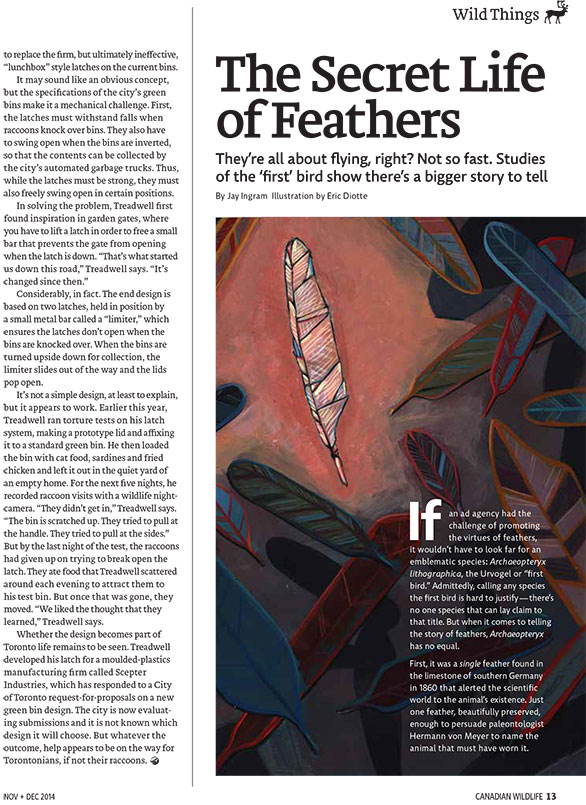 They’re all about flying, right? Not so fast. Studies of the ‘first’ bird show there’s a bigger story to tell.

If an ad agency had the challenge of promoting the virtues of feathers, it wouldn’t have to look far for an emblematic species: Archaeopteryx lithographica, the Urvogel or “first bird.” Admittedly, calling any species the first bird is hard to justify — there’s no one species that can lay claim to that title. But when it comes to telling the story of feathers, Archaeopteryx has no equal.

First, it was a single feather found in the limestone of southern Germany in 1860 that alerted the scientific world to the animal’s existence. Just one feather, beautifully preserved, enough to persuade paleontologist Hermann von Meyer to name the animal that must have worn it.

Shortly afterward, von Meyer revealed a sensational skeleton of the animal itself. It was crow-sized and very dinosaurian, with a jaw full of teeth and claws on its forelimbs — but with imprints of feathers all around the bones. The skeleton was sold to the British Museum, where it resides still.

Today, there are 11 known Archaeopteryx skeletons, and the feathers are still yielding secrets, more than a century-and-a-half after they were first discovered. For instance, it wasn’t until 1978 that American scientist Alan Feduccia pointed out something totally obvious about the single 1860 feather. The central shaft, the quill, was off-centre, much closer to the leading edge than the trailing. This is characteristic of feathers that experience the stresses of aerodynamics. The leading edge of the wing needs support immediately behind it or it will buckle. So, Feduccia concluded, this should end the dispute over whether Archaeopteryx could fly. It wouldn’t have had aerodynamically tuned feathers if it didn’t.

Skeptics could have been forgiven for doubting Archaeopteryx’s flying abilities, though: it didn’t have the powerful breast muscles that birds have and its skeleton seemed ill-suited for the stresses of flight. On the other hand, why would any animal, especially a reptile like this one, have feathers if it weren’t a flyer? Over time, several reasons have been suggested: insulation for the body, extensions of the forelimbs for grasping insects, acting as a partial parachute for an animal that climbed trees and glided down, or even for display.

In the most recent research, German scientists published an exhaustive study of the 11th and most recent skeleton in the journal Nature in July. They showed that Archaeopteryx had feathers with several different forms. Its wing feathers were the familiar aerodynamic shape, while its body feathers smaller and symmetrical — but it also had feathers on its legs, long feathers so prominent that reporters in the media were calling them “trousers.”

Archaeopteryx is a relatively long-legged animal anyway, reminiscent of the roadrunner of the southern U.S. But its legs sported feathers four centimetres long, sticking straight out from the leg, like a toilet brush. Closer to the ankle, the feathers were shorter. The scientists were impressed by the fact that these leg feathers were symmetrical, that is, not adapted to flight, whereas feathers on the wings and part of the tail were. While they toyed with the idea that somehow these feathery leg extensions could play a role in landing, they were careful to point out that display (or its inversion, camouflage) might have been the real raison d’être for leg feathers.

In this, they were building on earlier studies, one of which, amazingly, was able to infer the colours of feathers by measuring the size, shape and density of microscopic melanosomes preserved in the fossil. Here, from that study, is the best guess for the plumage of a late Jurassic feathered dinosaur: “the body was gray and dark and the face had rufous speckles. The crown was rufous, and the long limb feathers were white with distal black spangles.”

The image is captivating, but the most important lesson is likely that the diversity of feathers on the animal’s body strengthens the idea that while feathers had multiple uses in these ancient creatures, flight wasn’t necessarily the first, or even the most important. So abandon any thoughts you might still hold of the straightforward evolution of feathers, flight and modern birds. But don’t abandon Archaeopteryx! It has had many pretenders to its throne since 1860, but it still gets my vote for Urvogel.