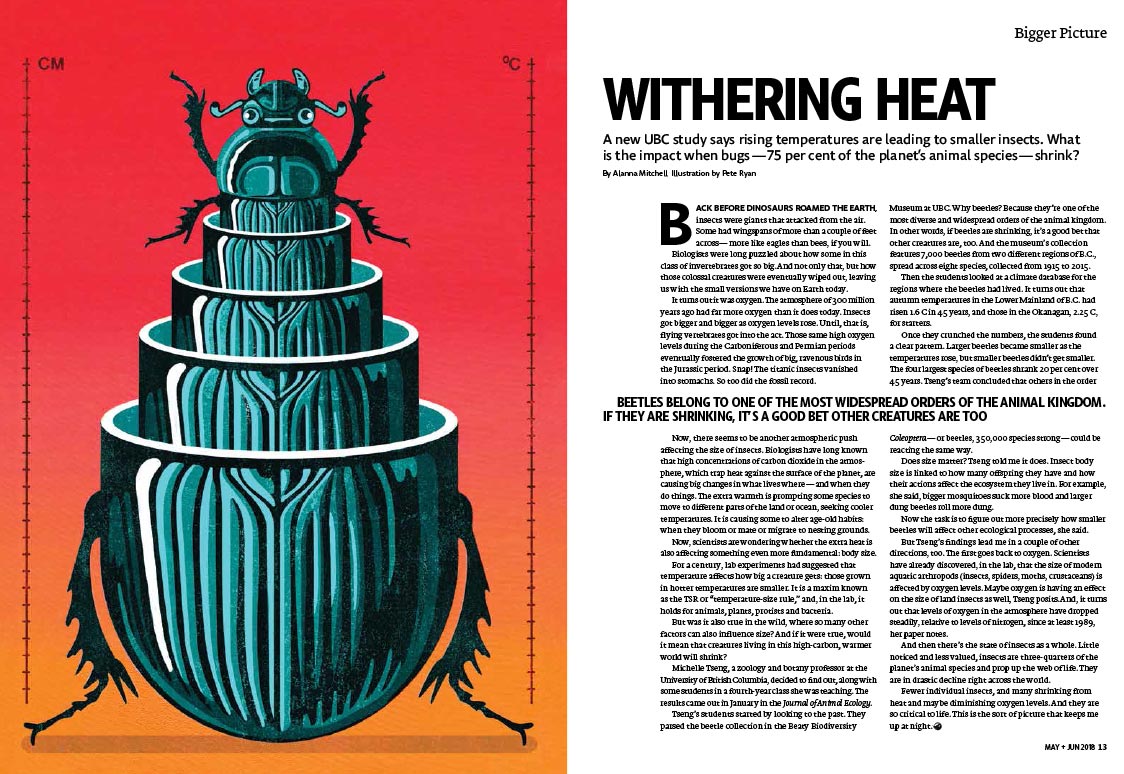 A new UBC study says rising temperatures are leading to smaller insects. What is the impact when bugs — 75 per cent of the planet’s animal species — shrink?

BACK BEFORE DINOSAURS ROAMED THE EARTH, insects were giants that attacked from the air. Some had wingspans of more than a couple of feet across — more like eagles than bees, if you will. Biologists were long puzzled about how some in this class of invertebrates got so big. And not only that, but how those colossal creatures were eventually wiped out, leaving us with the small versions we have on Earth today.

It turns out it was oxygen. The atmosphere of 300 million years ago had far more oxygen than it does today. Insects got bigger and bigger as oxygen levels rose. Until, that is, flying vertebrates got into the act. Those same high oxygen levels during the Carboniferous and Permian periods eventually fostered the growth of big, ravenous birds in the Jurassic period. Snap! The titanic insects vanished into stomachs. So too did the fossil record.

Now, there seems to be another atmospheric push affecting the size of insects. Biologists have long known that high concentrations of carbon dioxide in the atmosphere, which trap heat against the surface of the planet, are causing big changes in what lives where — and when they do things. The extra warmth is prompting some species to move to different parts of the land or ocean, seeking cooler temperatures. It is causing some to alter age-old habits: when they bloom or mate or migrate to nesting grounds.

Now, scientists are wondering whether the extra heat is also affecting something even more fundamental: body size.

For a century, lab experiments had suggested that temperature affects how big a creature gets: those grown in hotter temperatures are smaller. It is a maxim known as the TSR or “temperature-size rule,” and, in the lab, it holds for animals, plants, protists and bacteria. But was it also true in the wild, where so many other factors can also influence size? And if it were true, would it mean that creatures living in this high-carbon, warmer world will shrink?

Michelle Tseng, a zoology and botany professor at the University of British Columbia, decided to find out, along with some students in a fourth-year class she was teaching. The results came out in January in the Journal of Animal Ecology. Tseng’s students started by looking to the past. They parsed the beetle collection in the Beaty Biodiversity Museum at UBC. Why beetles? Because they’re one of the most diverse and widespread orders of the animal kingdom. In other words, if beetles are shrinking, it’s a good bet that other creatures are, too. And the museum’s collection features 7,000 beetles from two different regions of B.C. spread across eight species, collected from 1915 to 2015.

BEETLES BELONG TO ONE OF THE MOST WIDESPREAD ORDERS OF THE ANIMAL KINGDOM. IF THEY ARE SHRINKING, IT’S A GOOD BET OTHER CREATURES ARE TOO

Then the students looked at a climate database for the regions where the beetles had lived. It turns out that autumn temperatures in the Lower Mainland of B.C. had risen 1.6 C in 45 years, and those in the Okanagan, 2.25 C, for starters.

Once they crunched the numbers, the students found a clear pattern. Larger beetles became smaller as the temperatures rose, but smaller beetles didn’t get smaller. The four largest species of beetles shrank 20 per cent over 45 years. Tseng’s team concluded that others in the order Coleoptera — or beetles, 350,000 species strong — could be reacting the same way.

Does size matter? Tseng told me it does. Insect body size is linked to how many offspring they have and how their actions affect the ecosystem they live in. For example, she said, bigger mosquitoes suck more blood and larger dung beetles roll more dung.

Now the task is to figure out more precisely how smaller beetles will affect other ecological processes, she said. But Tseng’s findings lead me in a couple of other directions, too. The first goes back to oxygen. Scientists have already discovered, in the lab, that the size of modern aquatic arthropods (insects, spiders, moths, crustaceans) is affected by oxygen levels. Maybe oxygen is having an effect on the size of land insects as well, Tseng posits. And, it turns out that levels of oxygen in the atmosphere have dropped steadily, relative to levels of nitrogen, since at least 1989, her paper notes.

And then there’s the state of insects as a whole. Little noticed and less valued, insects are three-quarters of the planet’s animal species and prop up the web of life. They are in drastic decline right across the world.

Fewer individual insects, and many shrinking from heat and maybe diminishing oxygen levels. And they are so critical to life. This is the sort of picture that keeps me up at night.

When our blood begins to boil under the blazing summer sun, we go to all sorts of lengths to chill out, from taking a dip in a pool to standing in front of the open fridge door. But we arenât the only ones...

Can You Feel the Heat?

By 2100, average temperatures could rise by how many degrees?

Wildlife needs shelter for many reasons. It offers protection from inclement weather such as extreme cold, rain and heat. It helps them hide from predators.