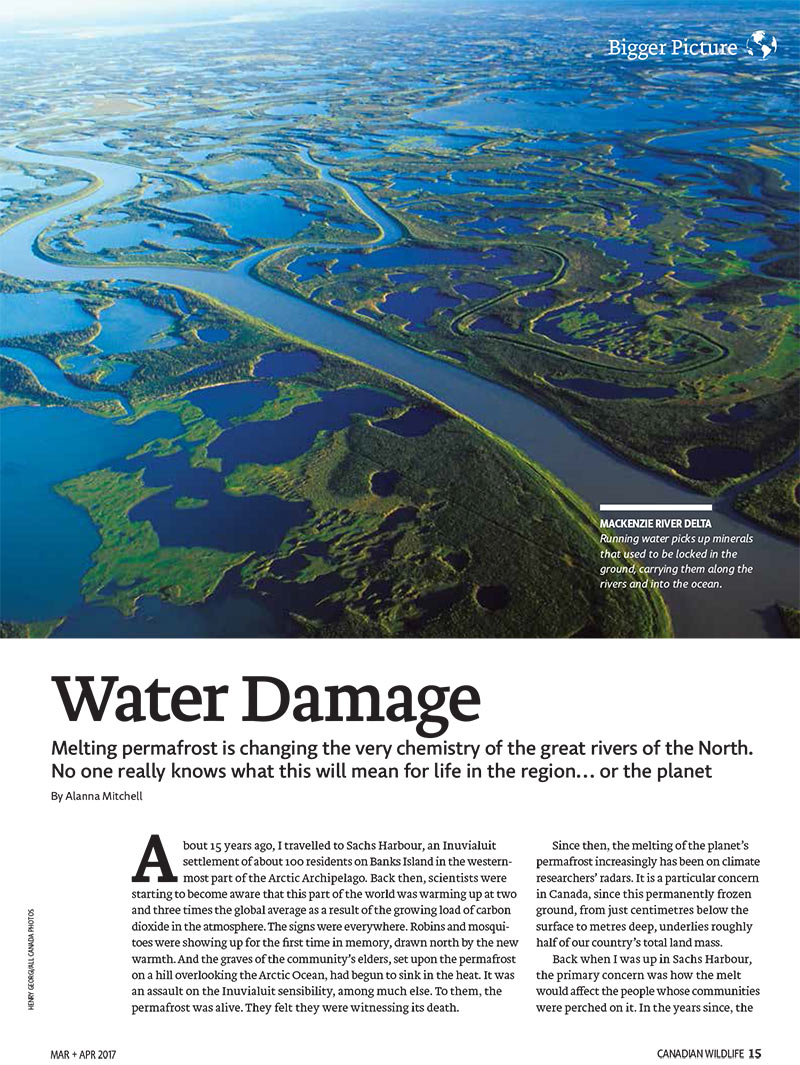 Melting permafrost is changing the very chemistry of the great rivers of the North. No one really knows what this will mean for life in the region… or the planet

About 15 years ago, I travelled to Sachs Harbour, an Inuvialuit settlement of about 100 residents on Banks Island in the westernmost part of the Arctic Archipelago. Back then, scientists were starting to become aware that this part of the world was warming up at two and three times the global average as a result of the growing load of carbon dioxide in the atmosphere. The signs were everywhere. Robins and mosquitoes were showing up for the first time in memory, drawn north by the new warmth. And the graves of the community’s elders, set upon the permafrost on a hill overlooking the Arctic Ocean, had begun to sink in the heat. It was an assault on the Inuvialuit sensibility, among much else. To them, the permafrost was alive. They felt they were witnessing its death.

Since then, the melting of the planet’s permafrost increasingly has been on climate researchers’ radars. It is a particular concern in Canada, since this permanently frozen ground, from just centimetres below the surface to metres deep, underlies roughly half of our country’s total land mass.

Back when I was up in Sachs Harbour, the primary concern was how the melt would affect the people whose communities were perched on it. In the years since, the scientific focus has been on the fact that melting permafrost releases methane — long stored in the frozen ground — into the atmosphere. Methane is about 20 times more efficient at trapping heat against the Earth’s surface than carbon dioxide. The race has been to figure out how much the released methane will affect the planet’s warming and how fast. Stay tuned.

Now, a pair of studies published late in 2016 look at a new facet of the problem. Using decades of data, they examine how permafrost melt is affecting water chemistry in the Yukon River and Mackenzie River basins. Together, these basins encompass nearly 2.7 million square kilometres of the frozen North.

It turns out that as permafrost melts, it allows water to flow to new reaches of the once-frozen soil, as well as into bedrock and groundwater. That running water picks up minerals that used to be locked in the ground, carrying them along the rivers and into the ocean in great pulses or fluxes. And that is changing the chemistry of the water in the rivers. Dramatically. Not just in summer, when more water is on the move anyway, but in the fall and winter, too, when it ought to be more sedate.

The Yukon River originates in northwestern British Columba, passes through Yukon and Alaska and ends up pouring water into the Bering Sea. In all, it covers an area about the size of California. In turn, the Bering Sea feeds the mineral-laden water into the Arctic Ocean. The study on the Yukon River basin shows that the flowing water contains such oddities as higher concentrations of sulphate, calcium, magnesium, sodium, potassium and dissolved organic carbon than it did three decades ago. The yearly sulphate flux alone is 60 per cent greater, and phosphorus 200 per cent higher in December.

One of the great truths of nature is that chemistry determines biology. So what’s this vastly different chemistry doing?

I asked Ryan Toohey, the hydrologist at the Alaska Climate Center in Anchorage and lead author on the Yukon River study, for details. He said a lot more research is being done on the fallout. But one of the worries is that higher concentrations of sulphates could end up putting more toxic mercury into circulation through microbial activity. Not a good sign for life.

The effects aren’t just going to be felt in the river basins that run through melting permafrost. Researchers are investigating how that new pulse of weird chemistry, contained in all that fresh water, will affect the workings of the Bering Sea and Arctic Ocean.

Piece by piece, from air temperature to water temperature to the melting permafrost to the chemistry of its galloping rivers, this critical component of the Earth’s system is changing dramatically. Just as the impacts of climate change were barely imaginable back when I was up in Sachs Harbour a decade and a half ago, the likely impact of such massive change is still largely unknown.

You can help prevent or slow the pace of such long-range impacts by doing the classroom activities and ocean action projects in this section.

The Arctic Grayling: At a Crossroads

The Canadian Wildlife Foundation recently donated $2,500 to Cam Stevens at the Alberta Conservation Association to research the effects of road crossings on the Arctic grayling in Alberta.

How Animals Survive the Arctic Tundra

The Arctic tundra, a snowy biome that is housed within the Arctic Circle, is characterized by freezing temperatures, strong winds and permafrost. Yet, despite being one of harshest environments on earth, many...

The taiga is a combination of sparsely treed belts of the subarctic forest that blends into the tundra in the north and the boreal forest in the south.