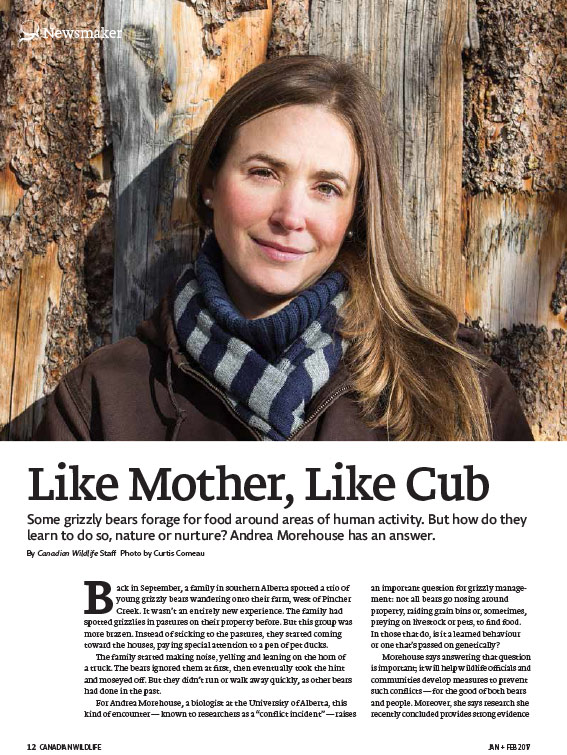 Some grizzly bears forage for food around areas of human activity. But how do they learn to do so, nature or nurture? Andrea Morehouse has an answer.

Back in September, a family in southern Alberta spotted a trio of young grizzly bears wandering onto their farm, west of Pincher Creek. It wasn’t an entirely new experience. The family had spotted grizzlies in pastures on their property before. But this group was more brazen. Instead of sticking to the pastures, they started coming toward the houses, paying special attention to a pen of pet ducks. The family started making noise, yelling and leaning on the horn of a truck. The bears ignored them at first, then eventually took the hint and moseyed off. But they didn’t run or walk away quickly, as other bears had done in the past.

For Andrea Morehouse, a biologist at the University of Alberta, this kind of encounter — known to researchers as a “conflict incident” — raises an important question for grizzly management: not all bears go nosing around property, raiding grain bins or, sometimes, preying on livestock or pets, to find food. In those that do, is it a learned behaviour or one that’s passed on genetically? Morehouse says answering that question is important; it will help wildlife officials and communities develop measures to prevent such conflicts — for the good of both bears and people. Moreover, she says research she recently concluded provides strong evidence that young cubs learn the behaviour. It’s the result of nurture, not nature.

To arrive at this conclusion, Morehouse and her team created a database tracking the genetic lineage of more than 2,000 individual grizzlies in a sub-population that covers southern Alberta, southeastern British Columbia and northern Montana. “Essentially, we built a family tree and completed a parentage analysis,” she says.

Next, Morehouse’s team collected hair samples around conflict sites in Alberta to determine which bears could be identified as problem bears. “We looked at those Alberta bears that had been in conflict and those that hadn’t,” Morehouse says. “Then we looked to see who their mothers were and who their fathers were, and whether their mothers or fathers had been involved in conflicts.”

Morehead’s team found that the overwhelming proportion of bears involved in conflicts were also the offspring of mothers that displayed conflict behaviours. The fathers? Not so much. Thus, the results of the study are strong evidence that conflict behaviours are learned behaviours, passed on from mother to cub during the two or so years young grizzlies stay with their mothers. (Grizzly fathers are not involved in raising offspring.)

The finding is significant because it helps wildlife officials develop better strategies for managing grizzly bears, which have been listed as a threatened species in Alberta since 2010.

“One of the biggest management take-homes from this work is that it really highlights the importance of trying to be proactive,” Morehouse says. She points to measures such as redesigning grain bins, a common target of bears looking for food at farms, so that they are more like the bear-proof garbage cans found in many parks.

Electric fencing can also discourage bears from foraging around places where humans live or work. Such deterrents reduce the opportunity for young bears to learn to associate people with food, reducing the likelihood they’ll develop conflict behaviours themselves. With her study complete, Morehouse is now working with communities on strategies to help ensure bears don’t develop those behaviours.