The Claws are Out 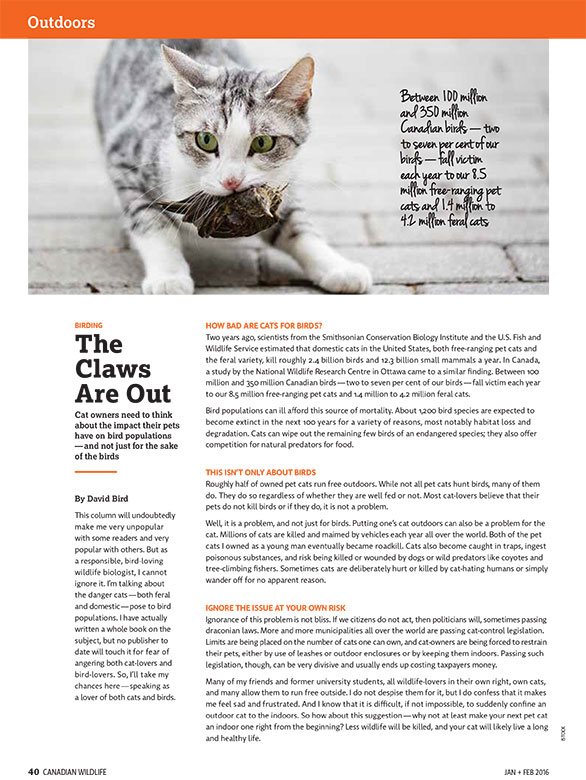 Cat owners need to think about the impact their pets have on bird populations — and not just for the sake of the birds.

This column will undoubtedly make me very unpopular with some readers and very popular with others. But as a responsible, bird-loving wildlife biologist, I cannot ignore it. I’m talking about the danger cats — both feral and domestic — pose to bird populations. I have actually written a whole book on the subject, but no publisher to date will touch it for fear of angering both cat-lovers and bird-lovers. So, I’ll take my chances here — speaking as a lover of both cats and birds.

HOW BAD ARE CATS FOR BIRDS?

Two years ago, scientists from the Smithsonian Conservation Biology Institute and the U.S. Fish and Wildlife Service estimated that domestic cats in the United States, both free-ranging pet cats and the feral variety, kill roughly 2.4 billion birds and 12.3 billion small mammals a year. In Canada, a study by the National Wildlife Research Centre in Ottawa came to a similar finding. Between 100 million and 350 million Canadian birds — two to seven per cent of our birds — fall victim each year to our 8.5 million free-ranging pet cats and 1.4 million to 4.2 million feral cats.

Bird populations can ill afford this source of mortality. About 1,200 bird species are expected to become extinct in the next 100 years for a variety of reasons, most notably habitat loss and degradation. Cats can wipe out the remaining few birds of an endangered species; they also offer competition for natural predators for food.

THIS ISN’T ONLY ABOUT BIRDS

Roughly half of owned pet cats run free outdoors. While not all pet cats hunt birds, many of them do. They do so regardless of whether they are well fed or not. Most cat-lovers believe that their pets do not kill birds or if they do, it is not a problem.

Well, it is a problem, and not just for birds. Putting one’s cat outdoors can also be a problem for the cat. Millions of cats are killed and maimed by vehicles each year all over the world. Both of the pet cats I owned as a young man eventually became roadkill. Cats also become caught in traps, ingest poisonous substances, and risk being killed or wounded by dogs or wild predators like coyotes and tree-climbing fishers. Sometimes cats are deliberately hurt or killed by cat-hating humans or simply wander off for no apparent reason.

IGNORE THE ISSUE AT YOUR OWN RISK

Ignorance of this problem is not bliss. If we citizens do not act, then politicians will, sometimes passing draconian laws. More and more municipalities all over the world are passing cat-control legislation. Limits are being placed on the number of cats one can own, and cat-owners are being forced to restrain their pets, either by use of leashes or outdoor enclosures or by keeping them indoors. Passing such legislation, though, can be very divisive and usually ends up costing taxpayers money.

Many of my friends and former university students, all wildlife-lovers in their own right, own cats, and many allow them to run free outside. I do not despise them for it, but I do confess that it makes me feel sad and frustrated. And I know that it is difficult, if not impossible, to suddenly confine an outdoor cat to the indoors. So how about this suggestion — why not at least make your next pet cat an indoor one right from the beginning? Less wildlife will be killed, and your cat will likely live a long and healthy life.

Thereâs no doubt Fluffykins is the perfect feline in your home, but once you let him outside he could be terrorizing the neighbourhood. Every year in Canada, 140 million birds and small animals are killed by...