The Art of Climate Change 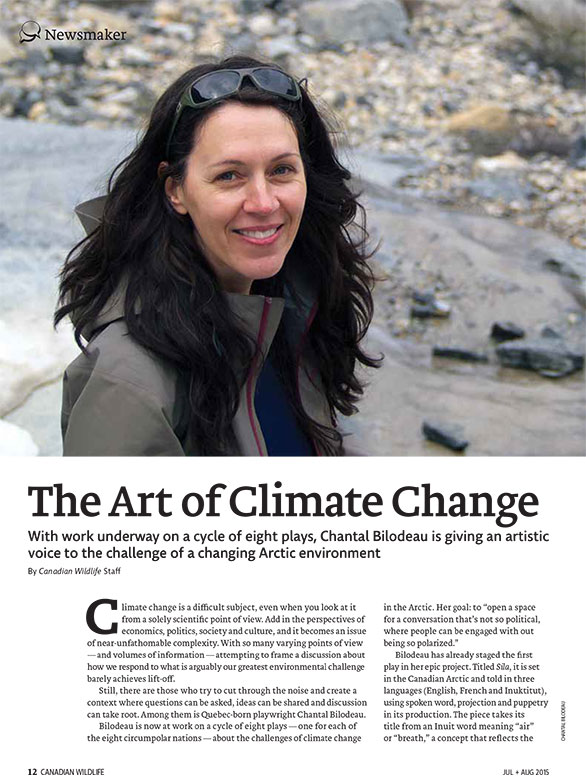 With work underway on a cycle of eight plays, Chantal Bilodeau is giving an artistic voice to the challenge of a changing Arctic environment.

Climate change is a difficult subject, even when you look at it from a solely scientific point of view. Add in the perspectives of economics, politics, society and culture, and it becomes an issue of near-unfathomable complexity. With so many varying points of view — and volumes of information — attempting to frame a discussion about how we respond to what is arguably our greatest environmental challenge barely achieves lift-off.

Still, there are those who try to cut through the noise and create a context where questions can be asked, ideas can be shared and discussion can take root. Among them is Quebec-born playwright Chantal Bilodeau.

Bilodeau is now at work on a cycle of eight plays — one for each of the eight circumpolar nations — about the challenges of climate change in the Arctic. Her goal: to “open a space for a conversation that’s not so political, where people can be engaged with out being so polarized.”

Bilodeau has already staged the first play in her epic project. Titled Sila, it is set in the Canadian Arctic and told in three languages (English, French and Inuktitut), using spoken word, projection and puppetry in its production. The piece takes its title from an Inuit word meaning “air” or “breath,” a concept that reflects the challenges Bilodeau discovered in trying to give an artistic expression to her themes.

Initially, she had envisioned creating a traditional narrative, centred on the opening up of the Northwest Passage and its potential impact on Inuit communities. But after spending three weeks on Baffin Island — exploring the land, meeting Inuit elders and talking to people from different walks of life — she decided a standard storyline, one with a main character facing a singular challenge, would not meet her needs. The issues are simply too complex for a singular point of view.

So, Sila focuses on an ensemble of characters — a climate scientist, an Inuit activist and her daughter, an elder, a member of the Coast Guard, and a polar bear and her cub — through whom Bilodeau explores the facets and interconnections of many points of view.

“I wanted people to understand the complexity,” she says. “That’s the only way you can stay away from being radical, which isn’t helpful.”

Two productions of Sila have already been mounted, one at the University of New Hampshire and one at the Underground Railway Theatre in Cambridge, Mass.

Bilodeau is also deep into the second play of her cycle. Called Forward, it takes its title from the English translation of the Norwegian word “fram,” the name of the ship explorer Fridtjof Nansen sailed in his late-19th century attempt to reach the North Pole. Again, her work weaves together multiple points of view, using travel through time to meet characters behind pivotal developments in our relationship to the Arctic and explore the history of climate change.

Forward will premiere at Kansas State University in 2016. Bilodeau, meanwhile, has started conceptual work on the third play in a series. Completing the entire project “will probably take my whole career,” she admits. But even in these early stages, her larger goal is clearly in focus.

“I want to inspire hope,” she says, noting that much of the art created around the issue of climate change tends toward the apocalyptic point of view. “Not to belittle the urgency of the problem, but I want to think about it in a way that is hopeful so that we can do something and not feel so powerless.”