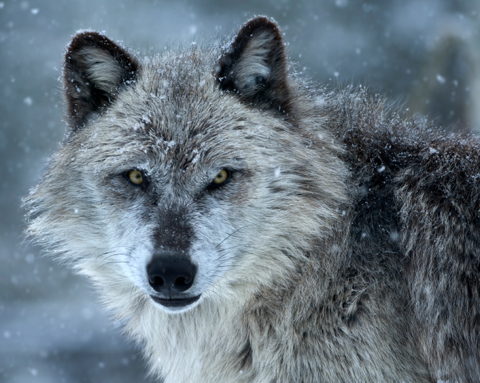 I used to have nightmares about wolves when I was a child. I’d be playing outside, and they’d come racing towards me from the neighbouring field. To. Gobble. Me. Up.  No wonder I was horrified! The fairytales we tell our children make wolves out to be nasty villains time and time again. Little Red Riding Hood’s sweet ol’ grandma was gobbled up by a wolf. The Big Bad Wolf stalked the Three Little Pigs’ homes. And who can forget the fate of the Boy Who Cried Wolf? Gulp. Scary stuff for a kid.

In reality, wolves aren’t all that bad. I mean, they’re not harmless bundles of fluff, but they’re certainly not as threatening as our society makes them out to be.

In fact, wolves might actually be key to creating healthy ecosystems. With big game animals as their snack of choice, wolves help control populations. Researchers have found that in places like Anticosti Island, Pennsylvania and Wisconsin, where wolves are absent, white-tailed deer populations have exploded and damaged forests.

They also keep mesopredators (medium-sized predators, like coyotes) in check. An Oregon State University study found that when wolf populations in the wild were restored, coyote numbers dipped. In Yellowstone National Park, an increase in wolf numbers has reduced coyote numbers by 50 per cent. And the wolf is not the only large predator reaping the benefits. In the northwestern U.S., Canada lynx numbers have grown because their primary prey, the snowshoe hare, has flourished thanks to the coyote population shrinking as a result of a resurgence of wolves. It seems wolves are crucial to maintaining a healthy balance in ecosystems.

So maybe, just maybe, the books had it wrong. Maybe we should stop villainizing these beautiful and beneficial canines and start admiring them.