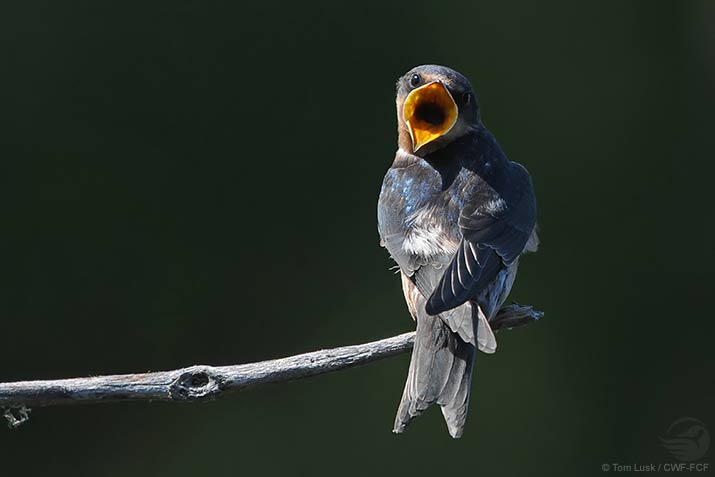 The barn swallow is one of the world’s most common and widespread species, inhabiting every part of the globe except Antarctica.  In Canada, it graces every province and territory, arriving in late April and departing in early November. During this time, they tend to inhabit areas very close to humans.

Feeling Nesty
Barn swallows build their nests on a variety of man-made structures, including barns, of course, using mud pellets and fibrous materials. Within those nests, both monogamous parents will raise and care for up to two clutches per summer. If by any chance both parents are busy, other juveniles give them a hand feeding the hatchlings in their absence, acting a bit like babysitters.

Backyard Heroes
If you ever notice a barn swallow nest on your property, rejoice! Having barn swallows nesting nearby is a great thing: these birds feed mostly on flying insects, making them one of the natural agents for controlling fly and mosquito populations. When fall comes, barn swallows gather in large groups (sometimes, even with other species of swallows!) to feed intensively. That’s because they will need a lot of energy in the weeks to come, as they will migrate all the way to Central or South America, only to come back the following spring.

A Solemn Story for Swallows
As many other species of aerial insectivores, populations of barn swallows are on the decline. Although the reason behind this is poorly understood by researchers, it is thought that the loss of their nesting habitat (many of the older buildings where swallows opt to nest have been destroyed), the use of pesticides to eradicate their main preys and climate change are to blame.

You to the Rescue
You can still lend a hand to help the barn swallow remain a part of our natural heritage. For example, if you see a barn swallow nest, do not destroy it (these birds and their nests are protected by law), and instead, get information on how to cohabit with the species. If you have a suitable outbuilding in which you wouldn’t mind welcoming barn swallows, leave a door or window open to encourage them to build a nest inside.

Providing a source of mud nearby will also help with nest building, as they can make over 1,000 trips to build a single nest! Barn swallows may also use artificial nest cups attached to an appropriate surface, if you feel like offering a house warming gift. Whatever you do, please ditch your pesticides in the garden. They can have terrible affects on swallows. And, last but not least, embrace curiosity and learn all about barn swallows and share your knowledge with your community. The more people know about these beautiful birds, the more chance we have at saving them.

Although some birds, like American robins, barn swallows, and eastern phoebes, wonât nest in boxes, theyâll gladly accept nesting shelves mounted on trees or tucked under the overhanging eaves of your home.

Know which species are at-risk? Keep up to date on COSEWICâs assessments right here with CWF.