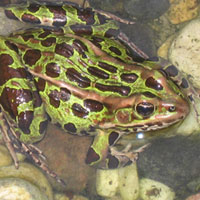 Description:
The Vancouver Aquarium sought to ensure that the only remaining population of Northern leopard frogs in BC was not lost from the Canadian landscape. While there are other populations of Northern Leopard frogs in Canada this is the sole population in BC and entirely distinct from those others. In order to do so, researchers bred the species in captivity with the intention of reintroducing the frogs into the wild. CWF provided funding for a second greenhouse to provide enough space to raise tadpoles and offer sufficient space to induce spawning.

In February 2009, the Vancouver Aquarium installed its first greenhouse with the intention of reintroducing the frogs into the wild. They housed 28 Northern leopard frogs (from three egg masses) in 2009, and 50 more tadpoles (from five egg masses) were added in May 2010. By spring of 2012, the frogs were mature enough to breed in order to ensure the future viability of the Northern leopard frog populations in British Columbia.