A debate about the ivory-billed woodpecker demonstrates yet again that even among scientists, evidence is often a matter of bias and belief

One of the many things that the followers of Donald Trump have brought to our attention is the fact that people can willfully ignore evidence in favour of belief. In response, there has been a cry for “evidence-based” thinking and actions. But “evidence” is very much in the eye of the believer. 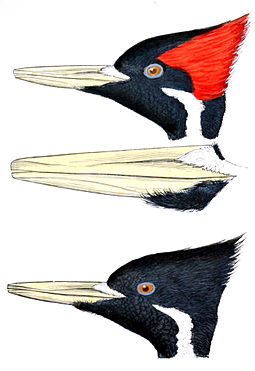 When someone wants something to be true, decisions of what constitutes supporting evidence are influenced by a set of unconscious psychological mechanisms: confirmation bias, the bandwagon effect, selective perception — there are many. In a controversy, it might be impossible to choose evidence that both sides agree is acceptable. This is true in politics, but also in science.

Take the case of the ivory-billed woodpecker. A magnificent, but extinct, woodpecker (so revered for its splendour and size it was called the “Lord God bird”), it was last officially sighted in North America in the mid-1940s (with a relict population lasting longer in Cuba). But then in 2004, a wave of excitement rolled over birders with the release of a video showing what could be an ivory-bill in the swampy woods of Arkansas.

But was it? The ivory-billed and the relatively common pileated woodpecker are similar, and any claim of an ivory-billed sighting has to eliminate the possibility of confusion between the two. And that turned out to be extremely difficult.

The video did indeed show a large white and black woodpecker, first a glimpse of part of the bird on the other side of a tree trunk (of course!), then a few wingbeats as it fled the camera into the woods. One of the key diagnostics that would separate the two birds is the amount of white on the upper surface of the wings. Pileated woodpeckers have little; ivory-billed, a lot. You’d think that video of the bird flying away from the camera would settle the question, but it did not.

The controversy reached the pages of the pre-eminent journal Science: first an article detailing the various bits of evidence from the video, then a retort by bird artist and field guide writer David Sibley, claiming a host of errors and unjustified conclusions. Sibley is a respected character in the birding world, but his opponents, those claiming the sighting was real, weren’t insignificant either: Cornell University, the Nature Conservancy and even the U.S. government.

What was fascinating about the back-and-forth was the incredible detail mined from the video by its proponents. According to them, one particular frame, a bit of unfocused white just behind a tree, shows the upper surface of the wing before the bird has actually taken flight. Upper surface white equals ivory-bill. To Sibley and his colleagues, the same frame of white is actually the underside of the wing as the bird launches itself, therefore underside white equals pileated. Unfortunately, the video itself cannot resolve that dispute.

Then there is the view of the bird in retreat, wings flapping, flashes of black and white. Here the two sides couldn’t agree on which side of the wing revealed a flash of white. It’s astonishing to me that no analysis of this video, flawed and indistinct as it is, has been able to resolve that fundamental question.

Even the making of wooden models of the two birds with wings that flapped when a cord was pulled, and then recording videos of those models under conditions designed to replicate the original distance and light levels, failed to convince anyone to change opinion.

The original flurry of interest over that sighting has subsided, with both sides holding to their original views. But just in the last few months, the ivory-billed woodpecker has reared its head again — literally. In January 2017, amateur birder Michael Collins published images of what he called an ivory-bill, collected while paddling 1,500 hours on the Pearl River near the Mississippi-Louisiana border with a camera attached to his kayak paddle. SCIENTIFIC EVIDENCE AND “PROOF,” IT TURNS OUT, ARE VERY MUCH IN THE EYE OF THE BEHOLDER

At the risk of revealing my own biases, I’d say this recent evidence (even an image of a bird’s head held at the characteristic ivory-billed angle) is less convincing than the 2004 video.

But it doesn’t matter: there are still many who think that the existing amalgam of poor video, vague sounds and wooden models is persuasive, and they will continue to search. There is a curious parallel here to the search for Bigfoot: the same techniques and arguments are deployed in favour of the evidence. One is science (after all, the bird did exist once); the other is not.

What all such stories have in common is belief, unshakeable belief, driven by the desire of discovery. In each and every case, that belief colours the admissibility of evidence. It’s not true that there are two ways of thinking, logical and irrational. Rather it is that human thought is entangled with both.

Why are woodpeckers drilling holes in my house?